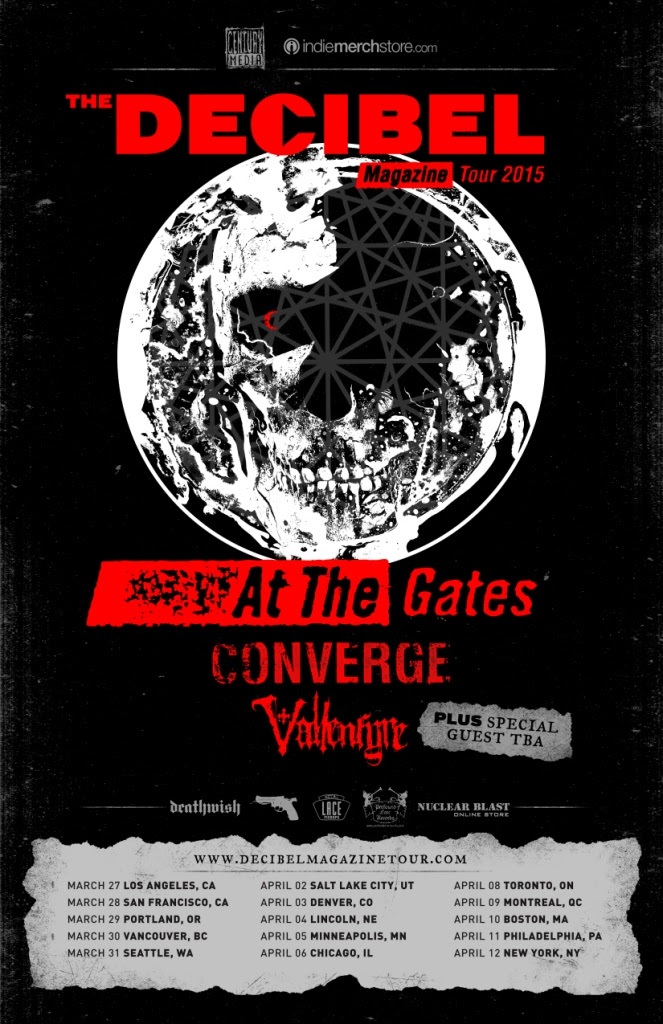 The Decibel Magazine Tour has established itself as the extreme music destination of the spring, bringing metalheads a thoughtfully curated lineup that celebrates the genre’s proud and diverse global legacy. The fourth installment is no different, as Swedish melodeath legends AT THE GATES join forces with U.S. hardcore heroes CONVERGE and U.K. death/doom supergroup VALLENFYRE, with yet one more very special opener to be announced this December.

“Super-stoked at finally getting to be part of the Decibel tour!”enthuses AT THE GATES frontman Tomas Lindberg. “A great mag, with great people behind it! And finally being able to rip out new stuff in front of a U.S. club audience? Sweet! The bill looks amazing, too! The most relevant hardcore band on the planet and the fiercest old-school death metal band on the same night as us? Excited!”

Four-time Decibel cover stars CONVERGE continue to not just push, but outright obliterate the boundaries of extreme music, most recently with 2012’s All We Love We Leave Behind. “We are excited to be part of this fantastic and diverse tour,” says frontman Jacob Bannon, who designed the tour logo and art. “For me, AT THE GATES are one of the most important bands in contemporary heavy music. It will be an honor to tour the country with them.”

Boasting present and past members of PARADISE LOST, MY DYING BRIDE and AT THE GATES, old-school death-dealing supergroup VALLENFYRE can’t wait to debut songs from 2014’s critically acclaimed sophomore stunner, Splinters. “This will be VALLENFYRE’s first U.S. tour, and what a tour,” beams frontman Gregor Mackintosh. “I think this is the most diverse and exciting bill of any metal tour I have seen this year. Great to be a part of it. We will be injecting some British filth into your unsuspecting American ears. Cheers.”