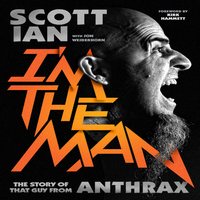 The most ubiquitous member of the Big 4 bands in terms of media functionality, Scott Ian, in spite of Anthrax’s mind-numbingly up-and-down career, has turned into a bit of a renaissance man. To his list includes spoken-word appearances, TV hosting gigs, reality show gigs, zombie-related TV appearances, and now author, which is where I’m the Man comes in. Surely the title should be of no confusion to metal-goers (it’s nicked from the band’s popular 1987 rap song of the same name), nor should the book be deemed as some self-congratulatory re-write/piss and moan session as to why Anthrax aren’t higher on the totem pole. Rather, it’s pretty honest stuff, especially when Ian details the band’s and his personal life’s low-points, which there are several, but hardly of the cliché variety.

After detailing his formative years growing up in the Long Island area, Ian documents Anthrax’s career event-by-event. Considering their story doesn’t have the air-time like Megadeth’s or Metallica’s, learning about the sacking of original singer Neil Turbin, or the back-and-forth regarding the mix of Among the Living are obvious page-turners. Career missteps like State of Euphoria (wish Ian would have mentioned that “Who Cares Wins” is an awesome song) and their ill-fated deal with Elektra circa 1993 are even more interesting, the latter of which relaying how band and label had aspirations of making Anthrax the proper runner-up to Metallica’s worldwide metal dominance. (Fact: Sound of White Noise is one of metal’s most critically underrated albums ever. EVER.)

Along the way, Ian sprinkles in various relationship woes, along with his tumultuous relationship with his mother, both of which are pretty forthright. Never the hard drug user or even drinker, I’m the Man avoids the oh-so-obvious “pit of drug despair” stories that usually emanate from auto-biographies, so it’s no surprise that the tail-end of the book finds Ian happily married, Anthrax properly re-adjusted with Belladonna, and with a bright future ahead. In all, easy to wipe this thing out in a few days, especially for anyone with even an inkling as to how Anthrax’s career has unfolded and wants to go deeper. Generic (but true) statement: I’m the Man is a killer read.