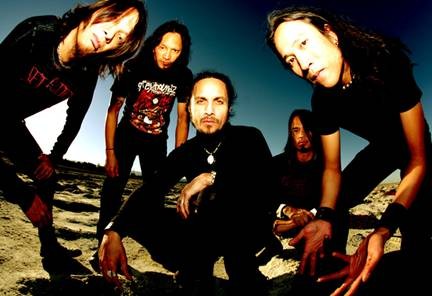 As a band that has always existed on the periphery of the thrash scene, San Francisco’s Death Angel have enjoyed a stop-start career that took them to unprecedented heights when they were teenagers to unfathomable depths after a disastrous bus crash in late 1989 derailed the band’s once-promising career. Bonded by a natural bloodline (four of them are cousins), DA’s quick ascension to the top of the thrash heap was fueled by their undeniable chemistry and their penchant for stepping outside of the restrictive thrash boundaries.

DA’s early albums Frolic Through the Park and The Ultra-Violence were far from the ordinary thrash albums coming out during the mid-80’s. A heady mixture of razor-sharp punk and speed metal, Death Angel gradually morphed into a melodic, song-oriented fixture the time of their 1990 album, Act III hit the shelves. Said album was mini-plateau for the band, as it received a major label release on Geffen and had production duties handled by Max Norman of Ozzy and Megadeth fame.

Their reunion for the Thrash of the Titans benefit show in 2001 sparked a full-blown revival, leading to their excellent 2004 album, The Art of Dying. By no means was this a rehash of the past, instead DA trimmed things down and went for the gusto with quick daggers of fun thrash and punk anthems that was universally lauded by critics and fans alike. Now, after a few years of touring and extensive songwriting, DA returns with Killing Season, set to be released in late February via Nuclear Blast.

Killing Season is the quintessential DA album – cut-throat, seething (check out singer Mark Osegueda’s laced diatribes), melodic, and accessible, with highlights ranging from album opener “Lord of Hate,” “Dethroned” (which sounds oddly like Guns ‘n’ Roses’ “You Could Be Mine), the war-inspired “Soulless” and “Buried Alive.” Wrapped up ever-so nicely in hot-shot producer Nick Raskulenicz’s (Rush, Foo Fighers) vibrant and ripping production job, Killing Season is well on its way to becoming one of the year’s breakout albums.

Lead guitarist Rob Cavesteny phoned in from his Bay Area to chat with Blistering and seriously, could this guy be any nicer? Here’s how it went down…

Blistering.com: The Art of Dying came out in ’04 and now Killing Season is coming out in late February. Why such the break in between albums?

Rob Cavesteny: Once again in typical Death Angel fashion, things happen in a fast, inadvertent fashion and it ‘had to be’ before we did anything else. You have to remember we did about one year of touring for the album and spent most of 2006-2007 writing the new album. We also did some festivals along the way, but yeah, we ducked out of doing things full-throttle since things were clashing with our real lives. Three DA kids were born in that time span – those were pre-planned – it was not planned for DA to balance out the situation with other things.

Blistering.com: Was the chemistry there when you got back together?

Cavesteny: It was strange at first, I will admit. It was a bit of rediscovery along the way. It was odd – we had to figure out what worked and work out the new music, but it got around to us feeling confident and the ideas were flowing and everything was kick ass.

Blistering.com: Nick Raskulenicz seems to have added a new element to your sound. What was it like working with him?

Cavesteny: It was insanely awesome! It was probably the best recording experience I’ve ever had. He knows all the latest technologies, has superior engineering and mixing skills, plus the vibe felt like he was an old friend. He was the right person to work with us, definitely.

Blistering.com: Was it anything along the lines of when you worked with Max Norman on Act III?

Cavesteny: Working with Max was insane, but Nick took us to a higher level. There is a certain professionalism to both of them, but we were way younger, in our 20’s when we were working with Max. Plus, Max knew who we were, but wasn’t a fan and Nick has been fan going all the way back to The Ultra-Violence.

Blistering.com: One of the things that jumps out immediately upon hearing the record is how it’s more melodic, yet not in a trendy or happy way.

Cavesteny: Right. It’s melodically well-done. We didn’t go overboard, but it’s definitely part of what we were going for. We just worked on everything a lot more. We spent hours just driving yourself to try different ideas and be open to new ideas. There was a collaborating going on where one guy would come up with an idea with someone and then the cool shit would start to come out. We actually ended up with a lot of left-over material, so we had to pick the 11 best songs.