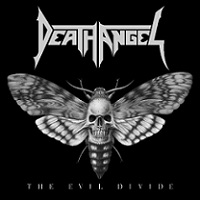 It’s been 15 years since Death Angel reformed at the famed Thrash of the Titans festival. A gathering that rounded up all of the classic Bay Area thrash bands for a good cause (i.e. raising money to help Testament’s Chuck Billy fight cancer), the festival made a lot of these bands who had been on ice turn realize they could still hang. Death Angel in particular were out of the game way too soon by the early ’90s, the result of a horrific bus crash and iffy reception to their Act III album. Since they were already a bunch of young dudes at the time of their split, they were able to resume activity like nothing had changed, resulting in a post-reformation five album run that finds them getting better by the album, as so learned on The Evil Divide.

Not much of a variation from 2013’s excellent The Dream Calls for Blood, The Evil Divide does find Death Angel readily engaged in their own brand of mobile, grappling thrash. While songs such as “The Moth,” “Father of Lies” and “The Electric Cell” are worthy pit-churners (mad props to vocalist Mark Osegueda on “Father of Lies” where he’s at his snappy best), it’s the groove-tastic pull of “Cause for Alarm” and melodic scope of “Lost” that demonstrate the type of songwriting tactics that could only come from a veteran band. “Lost” is of greater note, for it’s somewhat of a near-thrash ballad (say “thrash ballad” and this scribe things of the Testament song with the creative title of “The Ballad”), with Osegueda’s ever-underrated singing voice providing ample lift and coloring. Elsewhere, the chunky “It Can’t Be This” (yet another mid-tempo number) and “Let the Pieces Fall” retain the hardened, quasi-punk edge that has gradually infiltrated the band’s sound over the years.

Always easy to play the comparison game with the Bay Area bands, for they’re so intertwined. Like Exodus and Testament, Death Angel won’t pull any sonic rabbits out of the hat. But at this point, why even bother? Starting with 2010’s Relentless Retribution, Death Angel have been operating on a higher level than all of their peers, which like their appearance at Thrash of the Titans, has been one of the more pleasant surprises to grace the metal scene of late. The Evil Divide simply allows Death Angel to keep on keeping on.