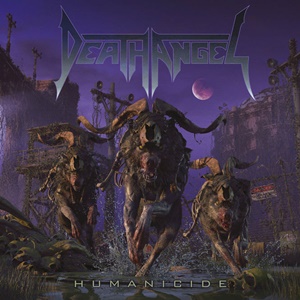 Anyone remember through the Thrash of the Titans cancer benefit for Testament vocalist Chuck Billy back in 2001 a resurrection of a genre many put to pasture by 1993-94? What originally was supposed to be a one-time reunion for Death Angel at that show turned into a full-fledged restart that hasn’t stopped since. While the early years rendered classics such as The Ultra-Violence and Act III for the Bay Area group, the newer discography hasn’t been too shabby – sharper, potent, and still kicking ass as Relentless Retribution and The Evil Divide showcase an older, wiser unit producing timeless thrash. The current lineup has been together for a decade – and their ninth studio platter Humanicide proves the aggression meets musicianship-laden output hasn’t been put on the backburner for commercial pastures.

The quintet understands how to intertwine clean, melodic passages against the heads down, crunchy riffs and vicious tempos in such a way that your brain and body engage with the music – gang-oriented choruses begging for call and response action from the listener. Guitarists Rob Cavestany and Ted Aguilar fill the axe landscape with tasty clean/electric nuances – the simpler yet circular instrumental passages for “Aggressor” an example where outside exotic textures transpose into heavier, groove-laden mechanics as the emotive, bluesy meets shred break whirls by. Punk-like strains penetrate “I Came for Blood”, Mark Osegueda rearing back into a bit of that early 80’s crossover magic that put Suicidal Tendencies on the world stage because of his spitfire delivery and scream to melodic switch-ups. Those who want those heads down headbangers sure to crunch bodies to elevate the sweat quotient will have no trouble enjoying “Alive and Screaming” and “Divine Defector” – and when you want a bit of a diverse diversion, the alternative riffing and lower, ominous verse melodies for the bonus cut “The Day I Walked Away” should appease welcome ears. Add in the occasional bass showcase as well as pummeling drum tempos and killer transitions/fill spots and there’s plenty to sink in and absorb from first to subsequent playbacks.

Death Angel appear confident that satisfying their own creative itch and not chasing down what suits and ties believe their music should be about represents the most authentic, genuine execution the listeners crave and want. Even when the band tip their cap to 80’s period Judas Priest for the bombastic, twin-guitar opening to the title track (“The Hellion” especially), it’s done out of respect – placing Humanicide right in line with Overkill and Kreator for veterans of the scene not content to rest on past laurels.