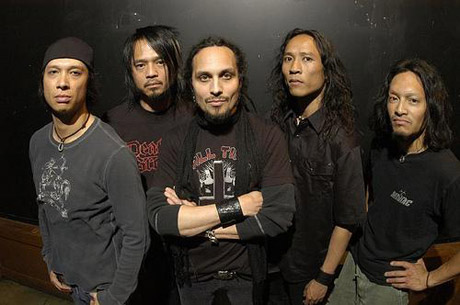 Blistering.com: Lyrically, this is by far the angriest Death Angel has ever sounded. Where did all of this rage come from?

Cavesteny: It came from the three of us – Mark, Andy (Galeon, drums) and myself, but I’ll tell ya – Mark went on a writing frenzy for this record. There is a lot of angst here, definitely, which is funny because we’re really chill and laid back. Outside of the band, we tend to just let things go and take it easy. When I saw the lyrics to “Lord of Hate,” I told Mark to just go with it and stay in that mode.

Blistering.com: “Sonic Beatdown” comes across as your proverbial ‘call-to-arms,’ while “God vs. God” hints at religion from a different perspective.

Cavesteny: Yeah, definitely. That one (“Sonic Beatdown”) is our call-to-arms, absolutely. “God vs. God,” the subject matter is actually not about religions versus religion. The song is about is using God as someone or something that controls your life, which in this case and Mark will tell you, is about drug addiction.

Blistering.com: Act III came out 17 years ago. Is it hard to believe you’ve gone from that point in time to being where you are today?

Cavesteny: The funny thing about that is that we never made it into the 90’s (laughs). We had the bus accident in 1990 and that was the end for us. We never had to go through all the shit that went down in the 90’s with metal, but before that, we were going strong, all the shows were sold out and we were right in the mix and the accident sucked the life right out of us.

Blistering.com: So that’s how The Organization came about, correct?

Cavesteny: Right, The Organization came from the shock from the accident and it really wasn’t that metal of a band. We wanted to distance ourselves from all of that and it was defense mechanism. Right before all of this (the bus accident), things were awesome. Behind the scenes, though, you have to remember that I was only 21 and we had been doing DA non-stop for eight years. The party was getting old and some of us started to wonder what life outside of the band was like. We were all detached from home and irritated.

Blistering.com: The video for “Seemingly Endless Time” still gets spun from time to time on “VH1 Classic.” Have you ever caught it?

Cavesteny: I love that song and for me, that’s my favorite song off that album (Act III) but it’s not my favorite video. I’ve never caught it, either. I don’t watch a lot of TV to start, but I do have people telling me they’ve seen it and for that, I’m stoked.

Blistering.com: Are you at all a fan of the current thrash revival?

Cavesteny: I haven’t had a chance to hear too much of it. The whole idea is killer – the more, the merrier and more power to them, man. I hope some of these bands start working on their own sound, though. It’s a topic that gets brought up a lot lately, but I don’t have too much of an opinion on it.

Blistering.com: I’ve heard some rumblings about a proposed Testament/Exodus/Death Angel tour package. Any truth to that?

Cavesteny: I have my fingers crossed on that, but we have headlining dates in store and possibly a May to June tour with God Forbid, although that’s not confirmed at the moment. I’m stoked about it and hopeful it happen, though. Exodus put their album out in the fall, ours is in February and Testament’s will be out right after that, so everything is lining up in a good way, we’ll have to see.

I know we’ll be doing some European festivals this summer and hopefully, hopefully come back with that package, but nothing is confirmed.

Blistering.com: One of the things that has been most evident from Death Angel since day #1 is the apparent camaraderie between the members. Is that still the most important thing to you and the guys?

Cavesteny: Dude, we would not even play together if we felt any different. It’s only way we know. It’s the ‘ole “boys club,” the gang, and it’s still an amazing feeling, even when the five of us get together in the practice room and start throwing down. I couldn’t imagine us being any other way.