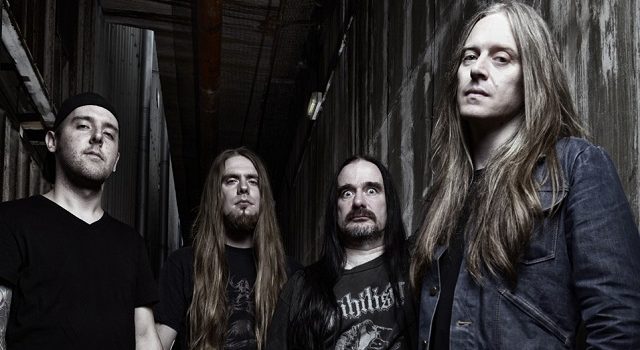 The album cycle for 2013’s marvelous Surgical Steel has taken Carcass to nearly every nook and cranny in the earth and back. Deserved rewards for arguably one of the best comeback records in recent memory. Not only has the album completely revitalized Carcass, it has become self-fulfilling, erasing the bad taste left after the band’s ho-hum 1995 split, and minor drama over the band’s initial reunion lineup that featured Arch Enemy’s Michael Amott and Daniel Erlandsson, neither of whom saw fit to continue with the band. It’s their loss and everyone else’s gain.

Their current trek with Deafheaven and Inter-Arma across North America should be the last in support of Surgical Steel, setting the stage for a much-anticipated new Carcass album, something clearly on the mind of guitarist Bill Steer, who was kind enough to set up shop for a chat in a Pittsburgh Starbucks prior to the band’s November 22 show at the Rex Theater. As easy-going of an interviewee as one will find, the ageless Steer was not only unbelievably nice, but certifiably frank about Carcass’s rollercoaster of a career. Onward we go…

Dead Rhetoric: When you started the Surgical Steel cycle three years ago, did you think it would go on for this long?

Bill Steer: Definitely not. The only person who could have visualized that would have been Jeff [Walker, bass], and given the way we communicate in this band, I booked rehearsals with Dan [Wilding, drums] at the start of 2015 to begin work on the new album. How wrong was I? [laughs]

Dead Rhetoric: What do you mean about the way you guys communicate?

Steer: We don’t tend to talk about things until it’s necessary. I think he was perplexed we had started writing. It was too early in his mind. We had a few tunes and we put them on the backburner and we’ll get back to it next year.

Dead Rhetoric: What have you learned through this whole cycle?

Steer: [pauses] Loads of things, really. I think I’ve learned I have a problem with too much repetition. There’s been periods where I’ve thought I’m playing this stuff worse than I did a year. I really believe it. It’s like climbing a mountain and you get to the top, and you can only come down after that. It’s not as drastic as that, but I feel you reach a peak of your optimal abilities to play a tune and it’s not going to get any better than that.

Dead Rhetoric: How do you fix that? Changing the songs in the setlist?

Steer: We sorta persuaded Jeff to mix it up a bit. There’s the three of us who really want to try some different tunes, then there’s his take on things, which is that it’s working, so leave it as is. But, we’ve reached a nice compromise. There are a couple of different tunes in this set, so for the rest of us in the band, it’s given us a kick in the ass. It’s quite energizing to play a couple of things that keep you on your toes.

Dead Rhetoric: Dan and Ben [Ash, guitars]. I remember Jeff saying when you first got back together that there were a few high-profile guys who wanted the two open spots. In hindsight, do you feel like you’ve nailed it with Dan and Ben?

Steer: Yeah, we are very lucky. I think the key to the whole thing was Dan, really. The pair of us—Jeff and myself—had made the decision we were going to plow ahead and do a new album because the Arch Enemy guys [Michael Amott and Daniel Erlandsson] had quit. It was a real fork in the road; either we give up or carry on. Given the stubborn nature the pair of us share, we naturally wanted to do some more stuff. I had always wanted to do a new record. I couldn’t realize it with that lineup, with the Arch Enemy angle.

Dead Rhetoric: You’d have to be sharing time.

Steer: That, and they had no interest in making a new album. It was totally counter…in their minds, Arch Enemy is the main job, the Carcass thing was “Let’s do a couple of tours and forget all about it.” We were at cross purposes from the start, but it didn’t really commence the opening until the end. It was back to me and Jeff and I said, “I’ve got a bunch of ideas which I think sound like Carcass music. We should at least try it. No one has to hear it if it’s embarrassing.” Of course, the first thing was a drummer. That was always the first thing. I already had somebody in mind from one of the U.S. tours we had done, and that was Daniel Wilding, who played in Aborted. I saw him in Aborted and I remember just being very impressed with his playing.

Dead Rhetoric: He’s really precise, but there’s always been an element of groove to Carcass. Daniel was good, but he’s a tad stiff, and Ken [Owen] wasn’t stiff at all. Dan is the right combination.

Steer: There’s a real flow to his playing. Also, the personality is an important factor. He’s a very relaxed, well-adjusted human being, much older mentally than he is in years. He’s great. Really what happened, I had an idea for a drummer, then Jeff had an idea, we tried Jeff’s guy first. He was competent, but it didn’t really…it didn’t fly with me. A couple of days later, we had Dan come down to rehearsals and it was just instant. Even Jeff said, “Okay, fine. Your guy wins this one.” That was that. We had the lineup to make the album. We didn’t want to look at a second guitar player until after the record because we knew the chance of finding somebody who really fits the band stylistically, it was a very slim chance that would happen.

Dead Rhetoric: Plus, you did all of the guitar work on the album anyway.

Steer: That was the idea. It would be, stylistically, purer that way. No one could deny that’s 100% Carcass. You didn’t have some outside guy come in and put his sprinkling on the top.

Dead Rhetoric: Now with Ben being around the last three or four years, for the next album, will he contribute?

Steer: At this stage, it’s not clear whether he will actually be on the record, in all honesty. What he does live works in that environment. Recording is putting everything under a microscope. If somebody’s bringing in influences that are not within the scope of the band, it’s going to be problematic. Ben’s a killer guy and he works hard on his playing, but some of his favorite stuff is not our favorite stuff. If some of those things bled into our music, it would really dilute it, to be honest with you. It remains to be seen, but I’m just saying we wouldn’t just take another album. We want everything to be as good as it can be. You could have the best guitarist on earth, I’m sure if Steve Vai played on it, that would excite a lot of people, but it would dilute it. It wouldn’t work with our stuff.

Dead Rhetoric: As you get further into your career, are you more of a control freak with stuff like that?

Steer: No, only with that. Everything else, I have zero control. It is completely Jeff’s band. He makes every decision.

Dead Rhetoric: But the guitars, riffs…

Steer: That’s the only thing. It cracks me up when people refer to us as my band. I just laugh. They have no idea. The only thing is the music. I bring in a lot of riffs. That’s it. But in terms of where we’re doing things, how we’re doing them, everything is down to Jeff.

Dead Rhetoric: Because he’s the frontman, he’s seen as the face of the band. You’re pretty identifiable yourself, but Jeff has a unique personality so people identify Carcass with him.

Steer: Also, he’s not just the frontman. He’s the lyricist and he controls the visual output, whether it’s album sleeves, the stuff people see onstage, all of the videos, which I detested. I hated it. But again, people that are in the band are into it, so I just have to accept that I’m outvoted.

Dead Rhetoric: What is your relationship like with Jeff? How has it evolved over the years? Do you appreciate each other more now?

Steer: I think deep down we do. It’s always going to be weird when you’re out there with a friend that you’ve known since, in our case, the ‘80s. It’s a long-term friendship. It’s turned into a working relationship. You’re in each other’s pockets and sometimes you get a little sick of each other, naturally. But I think we’re where we need each other to do this. As pig-headed as we both are, there’s an understanding that we rely on each other for certain things. I know I rely on him for a hell of a lot. I’m very conscious of that.

Dead Rhetoric: But he has you for the riffs.

Steer: It seems to balance out. Mostly we have a good time. We do a hell of a lot of traveling; the last few years have been silly. It’s a nice little team that we have. We tend to do everything as a gang. I thought that was normal. I thought you have your band, you have your little core or crew, and wherever you go, you go out for dinner together, you go out for drinks together. No one gets left out. But then I’ve heard from a couple of our crew guys that’s very unusual. They’re saying all the other bands they work with stay in their hotel rooms with their laptops, they won’t mix until it’s time to play. I’m sure that’s going to come across in the performances.