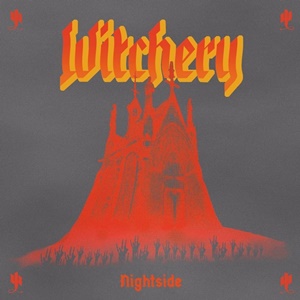 Celebrating their 25th anniversary as a group, Witchery never wavered from a sound that has been a culmination of blackened thrash with speedy, punk, and primitive inflections. When other artists may refine, repurpose, or expand upon their style – this unit found a sound that they locked into back on the Restless & Dead debut from 1998, continuing to open that creative spigot every few years as time allows (other bands and live responsibilities with The Haunted and Dimmu Borgir also factoring in). The eighth album Nightside beyond permanently welcoming live bassist Victor Brandt to the fold happens to be the first conceptual record for the band – encompassing demonic nightmares, unexplainable pregnancy, witch trails, and escapes from one area to another in a tightly delivered eleven-track window.

Guitarist Jensen crafts the main songs in a diverse, hypnotic swirl – specific tracks a bit more epic with darker, adventurous riffing that haunts the listener for “Storm of the Unborn” or “Left Hand March” while others just rip apart bodies in that straightforward speed and pounding framework like “Witching Hour” as well as “Churchburner”. Nods to early Slayer appear in the stop/start riffing plus sinister evil tones and tempo changes for the shorter instrumental “Under the Altar”, while the rhythm section of Victor Brandt and drummer Chris Barkensjö propel the mid-tempo Mercyful Fate meets Venom-ish militant musical nature of “Crucifix and Candle”, allowing the Jensen/ Richard Corpse axe team to paint broad strokes that add an extra level of devilish delight to the proceedings plus a fairly restrained, thoughtful lead break. Guests include Jeff Walker from Carcass vocally for standout “A Forest of Burning Coffins” plus supplementary leads from members of Wolf, Mercyful Fate, and Kvelertak. Witchery delivers maximum energy in economical fashion – thirty-five minutes is all it takes to entertain the masses here.

Old-timers will appreciate the lively tones captures for Nightside – it sounds fresh, in your face, and devoid of studio trickery or punched in, computerized angles to make everything align on the grid perfectly. Reliable, relentless, rivaling the influences of their youth – Witchery continues to impress at a point in their career whether others falter, wither away, or just retire.