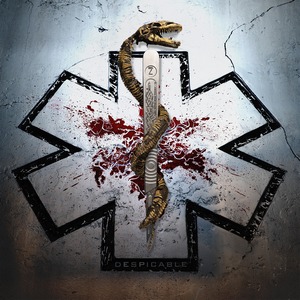 Surely, many folks in the metal community were upset when Carcass stated that their upcoming full-length release was going to be bumped back into 2021 due to the pandemic. But instead, we do get a few choice cuts in the form of this 4-song EP Despicable. But to think it a mere consolation prize would be to underestimate it severely.

While it’s short and sweet with four tracks, it doesn’t take away from the experience in the least. The embodiment of ‘all killer, no filler,’ unlike a certain Surplus Steel that was released after their smashing comeback in the form of 2013’s Surgical Steel. The longest cut (and title), “The Living Dead at the Manchester Morgue” begins with some plenty and foreboding leadwork and melodies as the intensity begins to rise (along with some effective groove). By the time the band starts in full-tilt, they’ve already established a fantastic base to the song that’ll have you hooked. A somewhat raw feeling to it ups the intensity, while groove-laden hooks and infectious melodies feel like the icing on the cake. “The Long and Winding Bier Road” also utilizes some delightfully catchy melodies, perhaps the strongest of all the EP, and the guitarwork essentially stands out from beginning to end. Admittedly though, there’s a case to be made for this across all four of these tracks. They are very guitar-forward and the emphasis on some groovy melodies is a real boost to the tracks. While some may yearn for more explosive speed at times, it’s really hard to argue when the melodies are this addictive and ear-friendly.

If these are the leftovers from Carcass’ next outing, then consider it to be a big one to watch for in the coming year. These four offerings are consistently strong, particularly in their swaying and weaving melodies, and are sure to satisfy that Carcass itch you’ve been wanting to scratch. Until next year, that is.