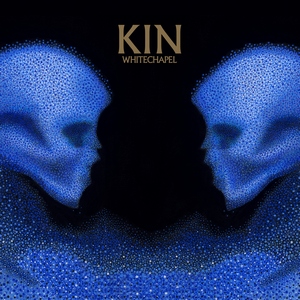 One of the definitive bands of the deathcore genre, Whitechapel turned some heads with The Valley.  It brought a more sensitive, if that’s the right word, side to the band.  Due to that, there was a bit of divisiveness to its release from those seeking another bludgeoning deathcore album.  But let’s face it, the band had been churning those out for years.  Kin does not relent from further deviation from their core sound, and as such, is the band’s strongest release to date.

Admittedly, this scribe wasn’t entirely stoked about the deathcore releases from the band, so Kin feels like a breath of fresh air – one that was now only hinted at with The Valley.  But some will definitely grimace when they hit play on the album and are (re)introduced to the more melodic elements that became much more prevalent last time around with the opening “I Will Find You.”  An acoustic opening leads into some groovy bits and plenty of melodies to be found.  The band has found footing in a sound that blurs between deathcore, metalcore, and even nu metal – and it odds works.  Tracks have more of a sincere feel to them, even when the band does bring out some of the more expected blistering elements, such as the grinding “Lost Boy” and even more thrilling “To the Wolves,” the band’s most vicious track on the album.  It works very well because there is some dynamic to be found around it, being surrounded by a more melodic yet groove-driven “History is Silent” and yep, you guessed it, a ballad track in the form of “Orphan.”  To these ears, there’s a lot of old school Flaw to the sound, with the positioning of the vocal patterns and honest lyrics.  The title track also rounds things out on a very melodic note, but serves as a fitting finale and has one of the stronger solos on the release.

Some will love Kin, and others will absolutely loathe it.  If you enjoyed The Valley, Kin is going to be right up your alley.  The blend of elements within the band’s sound makes for a feel that is more fresh than many of their earlier records.  There’s still plenty of vigor and aggression, but tapering it with some genuine emotions have proven that the band can really provide an exciting evolution for those seeking it.  If that’s not your bag though, it’s also a fair statement that you may long for some of those releases from the band’s back catalog.