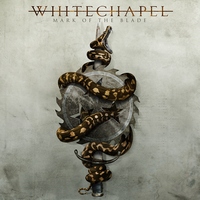 At this point in the career log of Whitechapel, you have to have some idea of what you are getting in advance. As leaders of the deathcore genre, even despite claims of “progression” and “innovation,” there’s a definitive format as to what Whitechapel churns out. Put out a new album, hit the road and tour incessantly – Whitechapel fans are bound to find what they seek with Mark of the Blade.

For the rest of us though, few surprises wait within the wings. The big news, of course, is that the band did a song with clean vocals – a move certain to dig up plenty of Internet-fueled hatred and dissing. But “Bring Me Home” and “Decennium” are probably some of the more enjoyable numbers as they do see the band stepping away from their own formatting boundaries. The clean vocals work, even if they are on a more ‘90s rock wavelength, and contrast strongly with the standard bellowing (the sort of thing that wouldn’t work over the course of a whole disc though). Outside of that, the other formatting change-up isn’t so successful, with the title track feeling more like an amped-up Slipknot, with vocalist Phil Bozeman near-scatting his vocal patterns. The rest of the album essentially falls into line with everything the band has done with their post-2012 material. Groovy, chug-ridden material with a few moments of interesting riff patterns or a solo, such as “Tremors” or “Brotherhood” (someone explain again why there three guitarists here), but much of it seems to fall by the wayside as soon as Bozeman begins growling into the mic.

With a few exceptions, Mark of the Blade serves up nothing but a retread of what the band has done before. No one’s expecting a revolution at this point, but let’s not pretend it’s anything more than it appears to be. Downtuned, groovy guitars that are a few steps above nu-metal and intelligible lyrics that sadly showcase the lyrical shortcomings (repeated shouting of “I just don’t give a fuck” in “A Killing Industry” being a prime example – this is rebellious teenage t-shirt level stuff). Whitechapel have their place in the scene, and if they bring a few newcomers further into the metal realm, kudos to them. But Mark of the Blade won’t find much support from the scene elders (not that they are looking for it).