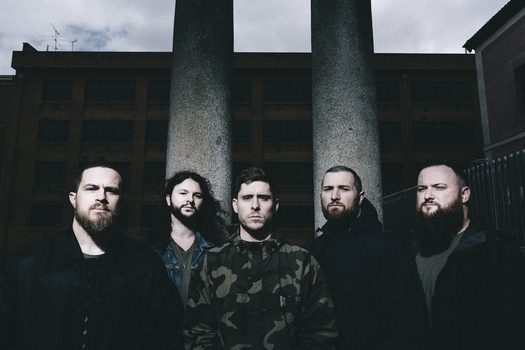 Considered by many to be at the forefront of the deathcore movement, the last few years in the Whitechapel camp have been anything but ‘by the books.’ Mark of the Blade saw the band extending some feelers outside of the more traditional deathcore territory, incorporating more melodies (and clean vocals). For the personal concept album of The Valley, the band has effectively double-down on their changes and given them a more proper exploration. The result is undoubtedly one of the band’s strongest moments, giving them a larger palette to spread their wings on while not forgetting about where they came from. We had a chat with guitarist Ben Savage about his thoughts about The Valley, expanding their sound, and what has made them successful over the years.

Dead Rhetoric: How do you describe the progression of Whitechapel’s sound with The Valley?

Ben Savage: Most of the material we had when we started writing was more melodic – the riffs we had gathered in the 2.5 years when we were touring for The Mark of the Blade. It definitely felt like sort of a stepping stone record with The Mark of the Blade. With The Valley we wanted to hone in more on it. We wanted to make it better. We also wanted a different sound, so we went with someone else to mix the record. It has a deeper, fuller sound to it than our previous records. We were super happy with how it came out.

The artwork fell into place too – we had a new, computer-y processed look, and we wanted it to be more old school look. Like it could have come out in the 1980s or something. It fit the concept and the song titles and everything.

Dead Rhetoric: It’s funny that you mention the artwork, it almost has a late ‘70s/early ‘80s movie art vibe to it.

Savage: Yeah, it all fell into place once Phil [Bozeman] came up with the title of the album. The music was already written and we were tossing out titles. The Valley had a Stephen King sort of vibe to it with the title alone, and we kind of ran with it. That’s all it took was a title and we ran with it. We are promoting the record kind of like a movie too – the music videos don’t feature us but a story that overlies the music. Each song has a different poster to it, which we are selling with the pre-order package. Each song has its own identity, and is like one chapter [in a story].

Dead Rhetoric: I know that Phil is the one behind the story but is there anything you can mention about the personal story behind The Valley?

Savage: For the first track, “When A Demon Defiles a Witch,” Phil actually got some of his mom’s old journals that she wrote in. one section in particular focused on her seeing a demon by the fireside at night, and she knew that if she saw the demon it was going to be by her bed later on. It was kind of a haunting visual. We wrote a song based around that – she considered herself a witch and the demon sat at her bedside at night. That’s just one song in particular.

“Brimstone” was about his stepfather, as is “Black Bear.” “Third Depth” is about living under the house in the basement – that’s where Phil’s room was. They lived in a two story house and he lived in the basement below, and that’s where he had those thoughts. Every song deals with different occurrences that happened in the Tennessee Valley, where the story is based. It gives it all away – the artwork, the singular eye, is one perspective having a view of the entire valley.

Dead Rhetoric: How much of a loss was Ben [Harclerode]’s departure, and what did Navene [Koperweis] add on drums for The Valley?

Savage: First off, Navene is one of my favorite drummers, so getting him on board was just a win. Once we found out that he was going to be doing it, we were halfway through the writing process so that boosted our confidence some – we could push things further. We knew we could do pretty much anything and he would be able to play it. Just talking about it just makes me realize how much confident Navene made us. He didn’t really help out in the writing process but he helped in that we knew we could do what we wanted. As far as Ben goes, he’s a great drummer but his attitude in the band…he had stuff going on in his life so it was good to have a new outlook in the band and not have a negative influence going on.

Dead Rhetoric: You mentioned that The Mark of the Blade was more experimental. What do you feel that you learned from that album?

Savage: We learned that Phil could sing, for one. That was the first album that had him singing on it. The fact that we knew he could sing, it was one more thing we could do. We could also play more melodic guitar riffs. We got to see what worked and what didn’t – that’s why I consider it more of a transitional album. It was also the last album with our former drummer.

Dead Rhetoric: What are some of the struggles of trying to break away from an established sound?

Savage: We weren’t trying to put out the same album again – I’ve always been a fan of bands like Mastodon and Opeth, where they ease in a transition. They didn’t do a dynamic shift with sound. You look at the arc of their career and see where we fit into that. That’s the template we went off of – to expand our sound. It gets boring writing the same records over and over again. That’s why bands just sound tired after a while.

Dead Rhetoric: What advantages does the three guitar setup give you?

Savage: The advantage is that I think it would be hard to get the sound we have without having three guitar players. With the influences – Alex [Wade] has more of a hardcore background, and stuff like the Deftones. Zach [Householder] has more of a traditional metal background – black and death metal stuff. I’m more of a progressive metal/rock guy. Those influences sort of feed in, and over time our songs have sort of melded in [those influences]. Each of us will have a riff in each song – that’s why it kind of sounds so expansive. That’s what we are going for at least. It would be hard to accomplish that with just one influence or one person writing it.

Dead Rhetoric: This is Exile, which was more or less your breakthrough point, is over 10 years old at this point. What do you look back on when you think of that album?

Savage: Just how we knew so little [laughs]. We were so ignorant to everything. We would take any tour and had no plan. Now we have more of a plan – we still feel like we have something to prove but then it was super competitive. The mid/late 2000s there was a ton of bands due to things like Myspace. We had a lot to prove and that came through in the music. There were so many parts to the songs. We wrote some over the top stuff. It was great – we just did a ten year This is Exile tour, and it kind of had an influence on The Valley. We could speed up the tempo, or take a part a little further if we wanted. That was something that we did that was cool – we had so many parts throughout a song. But it still felt like it was supposed to be there. It had a vibe about it. I have a lot of fond memories about that time.

Dead Rhetoric: What do you feel has allowed Whitechapel to remain successful over the years?

Savage: Consistency, and not resting for too long. We try to put a record out every two years. It was three for The Valley, but that is as long as we have taken. Consistency and progression – you have to keep that fire burning.

Dead Rhetoric: In talking with some other bands, one thing I’ve heard is that you guys have a solid work ethic and push yourselves each night. Do you feel that has also contributed to your success?

Savage: Yeah, I think so. It helps us get better too. Playing shows keeps us sharp. Playing This is Exile songs – my hand hadn’t worked that hard in a while. There’s a lot of speedpicking and triplets, and things like that. It keeps you sharp on your instrument. It keeps you from being lazy. You learn new things every time you go out too, as far as stage performance, lights, and everything.

Dead Rhetoric: What are your plans outside of the album release and Chaos & Carnage tour?

Savage: We have that, then we are doing Europe in the summer. As far as that goes, I don’t think I can announce anything else yet. But US and European tours for now.