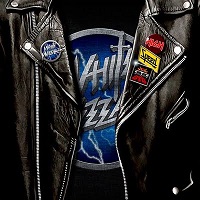 More retro and it’s not letting it up. And these guys are letting go of the past, which in metal, is acceptable – anywhere else, it’s not. So here we have White Wizzard from LA, brandishing a neo-NWOBHM sword, not as bouncy as Wolf or calculating as Cauldron, but capable, a bit watery, yet with some cool wares to keep the party going, methinks.

Of the seven songs here, most are bouncy, laced with twin-guitar harmonies, specifically the title track, which is the sort of purposeful rocker Riot made a career out of. Lots of early Maiden (think Di’anno and then some) on “Celestina” which is the type of boogie rocker ‘Arry and co. would never attempt, but it’s here on High Speed GTO.

Across the board, there’s nothing original here, although “Into the Night” has a “2 Minutes to Midnight” vibe to it (a plus), while “March of the Skeletons” (big bottom, big bass) and “Octane Gypsy” maneuver their way in and out of The Screaming Demon’s vocals. Yep – that’s his “stage” name.

Purely speaking from shelf-life terms, one has to wonder how such a revisionist band as White Wizzard expects to hang around. Fads…they are quick, but High Speed GTO is worth a slap on the ‘ole turntable and is good for a solid headbang around the block.