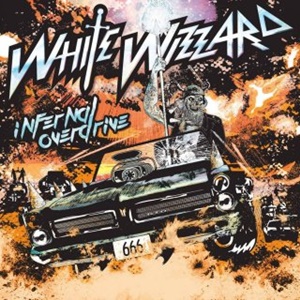 The brainchild of bassist/guitarist/songwriter Jon Leon, White Wizzard certainly have had their shares of trials, tribulations, ups, and downs for their decade plus of activity. Struggling label support, numerous lineup changes, touring mishaps, and crowdfunding campaign issues aside – when you look at the music, this has been a band set to fly the flag for traditional heavy metal high and mighty from the USA to the globe. Those who love galloping bass lines, high octane melodies, and twin guitar rhythm/harmony action can certainly dig into their discography – which for this scribe includes a healthy dose of 2009’s High Speed GTO EP and the second full-length Flying Tigers. Recruiting early guitarist James J. LaRue and vocalist Wyatt Anderson to the fold along with newest drummer Dylan Marks, Infernal Overdrive comes after a prolonged five-year respite/layoff, signing with another label in M-Theory Audio and ready to tackle the scene with a vengeance.

A propulsive drum salvo against careening guitar/bass action sets the tone early for the title track – Wyatt shouting and screaming to the high heavens as almost a follow up to “Painkiller” from Judas Priest while the lyrical content speaks to the discontent and political upheaval conquering the globe. The instrumental sections for this record rear back into 70’s progressive/exotic textures, playful in build ups and breakdowns, offering multi-layered aural appeal for further, headier engagement. White Wizzard lock into the twin harmony guitar motifs, but also know how to move forward into that next logical riff sequence for active, horns up/fists in the air compulsions. Check out the Maiden-esque brilliance for “Storm the Shores” or the tribal guitar/drum tradeoffs within “Metamorphosis” as the material keeps a traditional heavy metal follower hypnotized, the lead breaks even melodic and thematic to the arrangement on hand.

Midway through the record, the quartet flex their collective strengths into epic terrain – which could be risky, but Jon and the boys know how to keep things very interesting. “Chasing Dragons” has a bit of that early Metallica meets Maiden/Kansas flair, Wyatt injecting some killer background melodies that mirror the musical proceedings, while “Voyage of the Wolf Raiders” could compete hand in hand with a couple of Maiden-epics – specifically “Phantom of the Opera” and probably “To Tame a Land”, the marching aspect and instrumental sequences mining gold even as the tempos shift and dynamics move along. Even at just over an hour, Infernal Overdrive doesn’t feel like it’s too stagnant or one-dimensional – a testament to strong songwriting, the diversity, and the overall passion and power of the performances.

Bands get second, third, even tenth chances these days if the quality matters to the consumers. White Wizzard have righted the ship and put the focus squarely on the musical output here – reward them with your support if traditional heavy metal with that 70’s progressive flair checks all those right buttons.