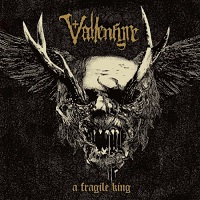 The side project of Paradise Lost lead guitarist Gregor Mackintosh, Vallenfyre was formed out of less-than-desirable circumstances, the catalyst being the death of Mackintosh’s father, John, in late 2009. As means of coping with his father’s passing, Mackintosh found inspiration in his vintage death, crust, and doom record collection, and quickly rounded up some close friends (as in, dudes from his Paradise Lost and longtime partner in sorrow My Dying Bride, et al) to create Vallenfyre and their debut full-length, A Fragile King.

Not unlike a lot of the throwback death metal bands that have come down the pike (Bloodbath, Murder Squad, Denial Fiend, etc.), Vallenfyre takes on the retro DM angle of the early 90’s, with Mackintosh’s surprisingly formidable vocals leading the way. In fact, the Brit sounds like a mirror image of his PL bandmate Nick Holmes in the Lost Paradise/Gothic days, with perhaps a bit more vitriol and spite (see the scathing lyrics on “Desecration”).

It’s no surprise the bulk of the songs on A Fragile King a cohesive, with a strike-first mentality, for Mackintosh’s songwriting acumen in PL is no secret to those in the underground. There’s an equal dosage of primal Swedish riff-action (“My Black Siberia”), as well as those churning, grueling doom riffs that are right out of the early PL wheelhouse (“Ravenous Whore,” “Seeds”). For good measure, Mackintosh and My Dying Bride guitarist Hamish Glencross drop in some eerie harmonies on “The Grim Irony,” showing how in-step Vallenfyre is with the collective background of each band member.

A Fragile King probably means more to Mackintosh than we could imagine, so there’s instant merit to a project like this. The old guard of the underground always find a way to make their early influences sound more impactful than most, all the more reason to dive head-first into this…and don’t forget about Paradise Lost either.