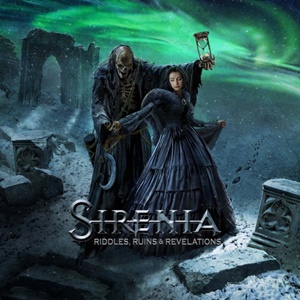 Once establishing a specific style or sound, artists often in the metal camps lean one of two ways album to album. Either content to churn out more of the same with little spices of flavor to differentiate each record or going full bore into something fresh and new regardless of the audience response. Sirenia as veterans of the symphonic metal landscape choose with their tenth studio full-length Riddles, Ruins & Revelations to inject more modern/electronic influences into their material, in essence creating much catchier / pop angles against the familiar heavier guitar tone and mezzo soprano voice of Emmanuelle Zoldan.

Upon initial listens it’s hard not to get swept up by the keyboard hooks and swirling rhythmic mechanics intertwining within “Addiction No. 1” and “Into Infinity” – the orchestration and choir nuances for the latter volleying against the stunted guitar riffs, circular refrains, plus Morten Veland’s harsh vocal embellishments to build anticipation a la Beyond the Black or Amaranthe. Solid grooves and strong fill flourishes along with an exotic texture give “Welcome to Ruins” spotlight treatment – the swinging main hook against some pummeling double kick propulsion plus half-time staccato-accents instrumentally sure to appease many modern symphonic/gothic metal followers. Long-time guest vocalist Joakim Næss makes his clean, morose flavorings known on “Downwards Spiral”, the uplifting chorus and incessant musical underpinning hypnotic and mesmerizing. Emmanuelle places her melodies in proper context – even injecting some ABBA-like harmonization during the chorus of “Beneath the Midnight Sun” while the Amaranthe-oriented keyboard hooks matter as much as the solid metal maneuvers, including a brilliant guitar break from Nils Courbaron. Choosing to end the record on a cover with “Voyage Voyage”, a song originally released in 1986 by Desireless, the French synth pop hit gets the Sirenia treatment with heavy guitars but keeps the revolving keyboard/tempo combinations as Emmanuelle freely navigates the French lyrics gracefully.

Riddles, Ruins & Revelations takes Sirenia into 2021 and beyond accepting the modern outlook on symphonic metal while also adhering to many of the trademarks that grabbed people’s attention in the first place. Time will tell if everyone enjoys the newer aspects to their sound, but for now the band seem content to experiment with pop/dance aspects in terms of hooks and melodies that make this record a bold statement forward for the quartet this deep into their career.