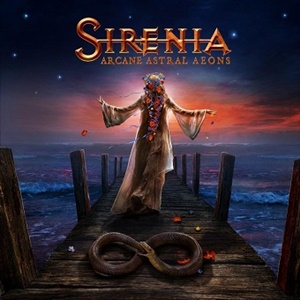 Taking an alliteration spin on triple A’s for the ninth studio platter for Sirenia, Arcane Astral Aeons keeps this symphonic/gothic metal unit moving along as expected. Mastermind Morten Veland isn’t apt to stray far from the formula, especially now as a worldwide touring entity building fanbases across multiple continents. Now on her second full-length with the group, Emanuelle Zoldan establishes her mezzo-soprano melodies and range confidently, striding into the versatile arrangements even when Morten provides that extreme/growl component as darkness sits against the light.

At times Sirenia decide to throw a groove combination or exotic licks to shake up the gothic/symphonic proceedings – “Love Like Cyanide” a clear example of the veritable stew of influences all configuring into an addictive chorus with supplementation from the keyboard/orchestration parts. Understanding when to let passages breathe and then go into layers of density heightens the aural anticipation – the semi-whistling effect for “Desire” that chases against eerie clean guitar action and whispering/ French carnival voices at times only makes the low-tuned staccato-driven guitars and pounding drums that much more hypnotic. The contrasts make the heavy parts heavier – producer Jacob Hansen honing and molding the extreme edges between Morten’s fierce growls and an evil guitar tone which helps “Queen of Lies” and “The Voyage” shine, visions of Mercenary in their prime conjuring as these riffs roll. Due to more touring over the past few album cycles, it seems like these tracks contain a higher focus to detail – never elongating parts just because, and instead sharpening the sword for tight four to six-minute arrangements. The choir chants during “Glowing Embers” contrast against the subsequent free-floating orchestration and crunchy, almost modern American-groove metal passages – opening horizons for Emanuelle again to showcase her seasoned vocals.

Sirenia aren’t a typical symphonic, gothic metal band because they chose to explore the heavier/extreme elements not just vocally but on the musical side too. For those that enjoy cinematic journeys and records that transport you away from a harsh reality into another world, Arcane Astral Aeons will serve its purpose well.