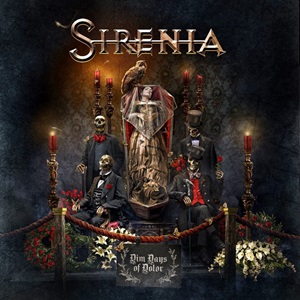 Succumbing to a quicker turnaround because of impending tour obligations, Dim Days of Dolor keeps the Norwegian band Sirenia churning along even as another vocal change takes place. Due to health issues, Ailyn stepped down in the middle of the recording, after four full-lengths and nine years under her belt. Enter Emanuelle Zoldan, a French singer who has been a part of the choir sections on Sirenia material since 2004’s An Elixir for Existence – so take comfort in the fact that she has the requisite skills and experience to elevate her status in the group. Building upon last year’s The Seventh Life Path, founder Morten Veland continues to enjoy the wide sonic possibilities that symphonic/gothic metal entails – in turn delivering another compelling release.

The symphonic layers and folk-ish oriented start/mid-section through “Goddess of the Sea” gives Sirenia a theatrical opener – the back and forth choir action in tandem to her main semi-operatic lead parts providing waves of diverse elements to key on, beyond the heavy guitar foundation, piano flourishes, and grandiose arrangement. Glorious keyboards signal another highlight “Treasure n’ Treason”, the musical hooks very reminiscent of classic Nightwish while Emanuelle effortlessly glides up and down her stellar register, the quieter instrumental portion channeling more of their electronic, gothic-oriented tendencies. Morten’s deadly guitar intuition skills come up like a lion waiting to feast at just the right moment – check out his lurking nature for “Cloud Nine”, or subtle melodic reverberations against some extreme runs for “Elusive Sun” for two contrasts that keep the listener engaged at different points of the record.

Adding in narrative spots heightens tension and anticipation, while Morten’s growls soothe the savage beast on “The 12th Hour”. You can even hear throwback references to early Paradise Lost on “Ashes to Ashes”, while the album ends on an emotional, reflective note for the piano-led “Aeon’s Embrace”, another stunner for those who love angelic melodies. Making this package more enticing through the artwork (can’t go wrong with skull pallbearers and an owl watching over the female corpse) and thick mixing/mastering principles courtesy of Jacob Hansen at Hansen Studios, Sirenia stride confidently with their style knowing they’ll keep the long-timers satisfied.

If any band can survive another significant vocalist change like Nightwish has in their career, it’s Sirenia- as Dim Days of Dolor keeps the creative machine rolling.