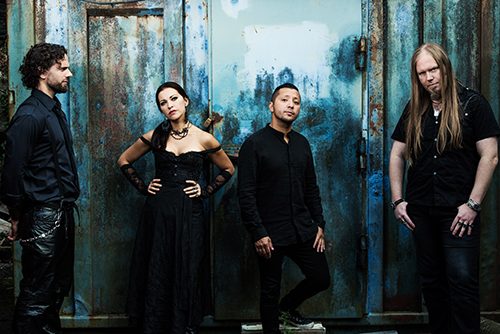 Change is constant in every aspect of life. Life decisions crop up, expectations and priorities shift, making it very difficult for even one person to stay on an original path over the course of decades. Norwegian metal band Sirenia come to a crossroads once again, replacing long-time vocalist Ailyn for Emmanuelle Zoldan, who has worked in the past as a part of the choir vocals for many Sirenia albums while also doing session vocals for Turisas and Trail of Tears among others. One look at the band’s official social media pages and you can see people drawing lines in the sand, curious to know if the band will stay the course or struggle to retain their fanbase due to another lineup shuffle.

Main composer and multi-instrumentalist Morten Veland understands fully the concerns – and with Dim Days of Dolor, keeps his eyes on the symphonic/gothic metal style that he’s refined since their inception in 2001. The aural prism of contrasts keeps the record bursting with dynamic vitality. It’s why a heavier, speedier track like “The 12th Hour” flows right into a more cinematic, symphonic-oriented mid-tempo anthem such as “Treasure n’ Treason”, as the two contrasts open up horizons for where each song can take the listener.

Ready for our second chat in consecutive years, Morten felt the need to set the record straight early on regarding the Ailyn situation – not an easy thing to do in a climate where ‘he said/ she said’ back and forth culture runs rampant to stir up drama. But we also discuss the importance of proper mixing/mastering in smaller recording budget times, the surprise furor regarding their upcoming European tour with Tyr, and dig a little deeper into the winter and spring seasons, where productivity and a positive outlook work in tandem. Take it away, Morten…

Dead Rhetoric: You have a new singer with Emmanuelle Zoldan, replacing long-time vocalist Ailyn. Did Ailyn leaving come as a surprise or shock – as from what I understand, Emmanuelle has been a part of the Sirenia camp in various roles in the past? And are you worried how the long-time fans will accept another significant lineup shift?

Morten Veland: First of all, the departure of Ailyn did not come as a surprise at all to any of us. Unfortunately, it was something that we more or less had been expecting over the last three years as we had been going through a lot of problems. And those problems weren’t getting any better, she has a lot of health problems and we were hoping that things would get better, unfortunately it was the other way around. We came to a point where she was not able to deliver what was asked of her, so we had no other options other than to end the cooperation. We had two alternatives- finish off the whole band or it was to find a replacement for her. We’ve been discussing this a lot over the last few years, the situation with waiting and hoping that things would get better but they didn’t.

We discussed whether we should just end the band or give it one more try, we came to an agreement that we thought it was too soon to end Sirenia, we knew that we had more to give so we decided to give this one more shot to try to continue with a replacement singer. Of course replacing a band member is always a difficult thing- especially when it’s the singer it’s very difficult. The vocalist in the band is obviously the element in the music that everybody relates the most to. So, changing the singer is never an easy thing. We just had to make sure that we found the right replacement, and all we can do is hope the fans accept this and like what we are coming up with on the new album.

Dead Rhetoric: How do you handle the responses to this type of news on the Internet? It seems a lot of passionate fans have very strong opinions about what takes place, even if they aren’t privy to the full details of the situation at hand?

Veland: Yes, of course everybody seems to have an opinion about it and that’s understandable. Ailyn as I mentioned had some health issues, and she didn’t want to talk about this and say anything, she wanted to keep things a secret and I can respect that. So we put down a common statement that we parted ways and that we wouldn’t go into any details with the reasons why because she was afraid that if we were speaking about the reasons why we ended our cooperation that it could be harmful for her further down the line as she had plans to continue with music. I can totally respect that- as soon as we released our statement, she went out immediately afterwards and said that this was a decision taken by the others in the band and she had nothing to do with it. What she is saying with these words is that we fired her- she made it sound like we fired her without any reasons whatsoever. I think that was kind of disappointing, I didn’t expect that from her. The truth is we didn’t fire her at all, we had to go through all these problems these last three years. She isn’t able to do a proper job anymore, I would respect it more if she would tell it how it was instead of trying to make the band look like the bad guys and make herself look totally innocent in all of this.

Dead Rhetoric: It seems like you were trying to take the high road, and not make it a he said/ she said situation on the internet sort of like what happened with Leaves’ Eyes after Liv left the band…

Veland: For us, we did this for Ailyn, she had a strong wish for us not to talk about her situation as she feared it would be a problem for her. We wanted to do her a favor and we said it was okay for us. We agreed on this common statement. It’s just like every other job, when you lose a job you never see the company you work for post on the internet that this guy lost his job because of this, and this, and this. I think it’s uncalled for, not everything needs to be necessarily a public thing. As soon as she went out and stated she had nothing to do with the decision, or we fired her without any reason, we felt pretty much stabbed in the back. I can understand she feels frustrated about the situation, but it’s also important to be realistic.

Dead Rhetoric: Dim Days of Dolor is the eighth Sirenia studio record – coming out relatively quick for the band after a biennial release schedule since 2007. Did you feel a rejuvenated sense of creative rebirth after The Seventh Life Path – or are you consistent in your workload and mindful of striking while the iron is hot so to speak?

Veland: The last period has been a tremendously creative period for me. New ideas come to my mind all the time- even with the material for this album I started working on it half a year before the previous album was finished. I think I’ve been working with this album for approximately two years as well. The amount of time I spent on this album is the same as the previous ones. The record company wanted to rush the release date a little bit since we have a European tour coming up now starting at the end of November, the original release date was going to be a little later. That’s why it seems like the time between releases is a little shorter, but the amount of time we put in has been the same.

Dead Rhetoric: Which particular songs on the new album changed the most from their original demo days until the final outcome? And are conscious of song order and dynamics when constructing Sirenia records?

Veland: Of course, because all of the melodies were originally written for Ailyn’s voice because she was still in the band until we were halfway through the recordings for this record. We didn’t even have time to rehearse with Emmanuelle, but we’ve known her for 13 years, she has done work with the choirs and recorded some lead vocals with us in the past. We know her abilities, she’s very professional and experienced as a singer, so we knew we could make this work. I think there were just a couple of songs where we did a couple of changes, the melodies to the quality of her voice. There were not any big changes- we did some interesting things on the song “Treasure n’ Treason”, the quiet part in the middle of the song. Apart from that it was just minor details.

Of course, the running order of the album is important as well. When writing my songs, the contrast and the dynamics I give a lot of attention to, and that’s important to the running order of the album. If you have a very slow, doomy track it’s a good idea to put that right after a very fast song, that way it sounds even more slow and doomy in a way. The other way around, if you have a really energetic song that you really want to pop, you need to put that after a slower or calmer song. Everything is thought through very well, there is nothing that is a coincidence on our albums.

Dead Rhetoric: Given the technology and changing business model of recording budgets –where do you allocate the funds to best maximize the final output, especially given the layers and outside choirs/instrumentation that can take place on a Sirenia album? Is that why mixing/ mastering matter so much these days?

Veland: In general, the whole industry over the last few years has been quite chaotic and a time of change. Ever since the internet has come in, the whole recording industry has been in a chaotic state of mind and doesn’t really know what to do. The fact is, everybody is losing a lot of money so of course the recording budgets are not what they used to be. In the past you could rent studio time in a bigger studio and do the whole recording there. These days that’s difficult because there is no money there for this. You have to think in other ways and do most of the recordings in smaller studios, and do some things at home. That’s easier to do nowadays because most of the recording studios are computer-based. That can help a bit, but in the end, you have to put a good amount of money into the mixing and the mastering. That’s where you finalize the sound and that’s the most important. The recording is important too- if you come in with tracks that have been recorded wrong, there are things that are not possible to fix in a mixing session. You have to make sure you are keeping a certain level of quality during the whole process.