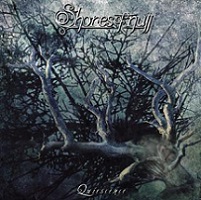 Every once in a while, a song comes out of nowhere that’s so good that you just can’t stop listening to it.  Shores of Null’s “Kings of Null” perfectly fits the bill here.  Randomly stumbling onto the band, the song’s perfect blend of driving riffs and catchy melodic vocals instantly sold me, and the rest is history.  Since acquiring Quiescence, it’s been a constant struggle to contemplate listening to it one more time, or listen to something else that needed a review.  More often than not, Quiescence has won the battle.

For a debut album, Shores of Null have a definitive knack for penning some seriously catchy and melancholic grooves and melodies.  Taking the best elements from doomy bands like Daylight Dies and Insomnium, the gloomy, droning riff style of Katatonia, and clean vocals that sound like a mash up of Jerry Cantrell, Volbeat’s Michael Poulsen, and Ghost Brigade’s Manne Ikonen, their music should sound more derivative than it actually does.  Perhaps its the addictive, often soaring choruses that leave the listener insatiable for more, or the way they subtly toss in elements other genres like Gothic, black, and even hard rock without alienating or watering down their vision of bleakness, but Shores of Null will command your attention for the entire 45 minute runtime.

Quiescence is one of those albums that will grab you as being immediately with its quality yet offers a return with each subsequent listen.  Certainly “Kings of Null” is an easy “single,” with growls mostly sitting the bench for this one and ready for the radio melodies (in a perfect world anyways), but it’s the strength of the remainder of the tracks that show a more multi-faceted approach to the material.  “The Heap of Meaning” throws a bit of Alice in Chains to the mix in the chorus while “Ruins Alive” starts off in a blistering black metal-ish pacing before slowing into melodic death territory.  “Pain Masquerade” nicely tosses in some gothic rock tones, while “Souls of the Abyss” dishes out some of the most emotive growls on the disc.  After a few listens, it may begin to feel as if each song is your favorite, until the next one starts.

There are virtually no missteps that Shores of Null have taken with Quiescence.  Pencil this one in as one of the very best albums you will hear this year; actually go ahead and write it in pen, there’s not much that will be able to top this.  This is how metallic darkness should sound in 2014.