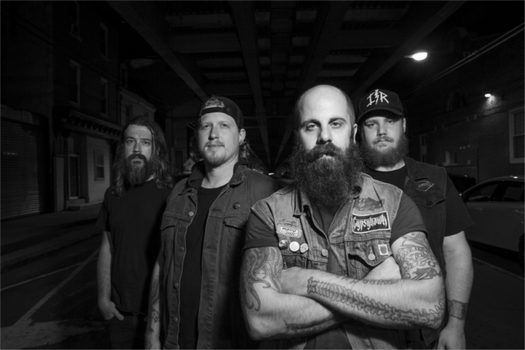 A quarter of the way through the year already, it seems 2018 is showing signs only of speeding up and becoming more expansive. Things on the video end look just as good, with lots of promising new releases around the corner that are sure to inspire some fantastic visuals. This month we tackle new ones from Angelus Apartida, Angra, Entheos, Gone in April, Hyborian (pictured above), Purest of Pain, Sabaton, Shores of Null, Therion and Thorium.

Angelus Apatrida
“Downfall of the Nation”
Cabaret De La Guillotine
Century Media
At this point, certain clichés abound when it comes to band performance footage in the video realm today (warehouses of the world, unite)! Spain’s Angelus Apatrida decide to use live in the throes of their audience elements for “Downfall of the Nation” – also incorporating narrative themes that makes things appear from multiple television angles. Riot and war footage from Hitler to other atrocities appear as the band glide through a crunchy thrash effort. It’s got a lot of the feel of Megadeth’s “Peace Sells…” classic video – and the splicing between the band and the woman struggling to handle these visions of death and destruction keeps your attention. Gives solid headway to the upcoming album release – proving that thrash continually has a global impact even in 2018. – Matt Coe (Angelus Apatrida on Facebook)

Angra
“Insania”
Ømni
earMusic
The Brazilian power/progressive metal veterans Angra, now firmly slotting Italian vocal phenom Fabio Lione in the singing role for his second album, it’s only natural to test horizons as the song “Insania” illustrates. The video cuts back and forth between the band hanging out in a bar (Fabio serving as bartender), and performance footage given a little electric ‘charge’ visually in certain spots. The strong bass/drum progressive propulsion allows Fabio’s mid-range and upper falsettos to shine – the chorus featuring a burst of power while the lyrics appear from time to time. The faster cuts allow the mind to absorb quite a bit of the music, the lead break revolving around more of a simplified, circular theme at first before showcasing the shred/tapping skills all mavens love. Add in the choir bombast around the five-minute mark and you can understand why Angra continue to have far-reaching appeal. – Matt Coe (Angra official website)

Entheos
“Pulse of a New Era”
Dark Future
Spinefarm
Certain to be a love it or hate it video, Entheos’ latest showcase from last year’s excellent Dark Future eschews the traditional ‘band tearing it up’ cliche and implements a lot of flashing lights and visual effects to change things up. But it does fit the somewhat trippy and psychedelic vibes that the song offers at times. While some may be given flashbacks to glitchy streaming video that hasn’t quite caught up with some of the effects, it also holds your interest a bit longer than a straight-ahead ‘band video.’ Entheos seems to have broken through with Dark Future, and with cuts like this, it’s easy to see why they are becoming a more dominant force in the extreme metal scene. – Kyle McGinn (Entheos on Facebook)

Gone in April
“Our Future Line”
Threads of Existence
Self-Released
A band that was already featured once in this column, Gone in April again manage to show how a band, even if unsigned, can provide a video that is as enticing as the music itself. This time the band focuses on a story of an orphan in the early 1900s who wants to get away from bonds after being mistreated by his guardian. Obviously, some grim imagery ensues after some escalation, with a particular twist coming in at the end of the video. Gone in April have a knack for creating some strong visuals for their music, but don’t let that overshadow the fact that they also bring a unique sound that can fit into everything from symphonic to progressive to death metal – worth a look for sure. – Kyle McGinn (Gone in April on Facebook)

Hyborian
“Maelstrom”
Vol. 1
Season of Mist
An animated video (heavy metal does to well with this avenue), Hyborian’s “Maelstrom” begins with some gory fun (including a hacked-off arm with a middle finger raised in the air) before moving into more trippy waters. The band’s heavy, Mastodon-esque riffing does well to pair itself with some colorful and psychedelic vibes as the lone warrior eventually overtakes the final, large enemy and stands victorious at the end of the video. The use of humor amid some large cliches make it a more fun watch than one might expect, and the riff-machine sitting behind it all will most likely ensure that you are at full attention from start to finish. – Kyle McGinn (Hyborian on Facebook)

Purest of Pain
“Vessels”
Solipsis
Self-Released
In a rather bleak view of our current society and technology (but one that also effectively nails it on the head, both lyrically and visually), Purest of Pain’s first official music video is equal parts uncomfortable and entertaining. The band centers themselves around a dinner table, only to fixate on their cell phones (from which black goo begins to spill early onto their plates early on). They begin to eat the goo and become rather messy, with some creepy worm visuals to up the gross factor as the song progresses, along with some wicked grooves. Is this a vision of our future or something that’s already here? Either way, it’s a video that isn’t going to leave your conscience for quite some time after it ends – which may, in fact, be the ultimate point of it all. – Kyle McGinn (Purest of Pain on Facebook)

Sabaton
“Kingdom Come”
Nuclear Blast
Taking a Manowar song and covering it for a video game entitled Kingdom Come: Deliverance, you can guess this isn’t going to be your standard metal video. Instead of showing the band, it’s just showing footage from said game with Sabaton as the backing track. The epic feel of the track (which Sabaton does a solid job of covering) fits well to this particular video game. Visuals of middle age battles and cgi fights may not stray outside the usual metal boundaries, but it’s a fun track and perhaps there will be some strong crossover of those into the game discovering Sabaton, and vice versa. – Kyle McGinn (Sabaton on Facebook)

Shores of Null
“Donau”
Black Drapes for Tomorrow
Spinefarm/Candlelight
A perpetual favorite here at DR for their interesting take on the death/doom sound, Shores of Null had a bit of bad luck with the video “Donau” not reaching these North American shores until just earlier this month (along with some other issues). So we are happy to report that the track can finally be viewed on YouTube for one, and that it’s an enjoyable video worth checking out. The band’s melancholic vibe is effectively captured in a way that blurs the lines between a video and ‘lyric video,’ with words written on a body that cuts between the shots of some hooded figures and the band itself. The track still holds up over a year later as well, employing heavy moments amid some more melodic ones – it’s a shame the band hasn’t been able to take off as they rightly should given the material at hand. – Kyle McGinn (Shores of Null on Facebook)

Therion
“Theme of Antichrist”
Beloved Antichrist
Nuclear Blast
You can bet your opera-wearing britches that Christofer Johnsson and gang had a difficult time choosing singles from their sprawling three-disc Beloved Antichrist. (How often do three-disc albums happen anyway?) “Theme of Antichrist,” in its grandeur and moon-trotting pomp, is the kind of song you’d see transferred from CD to stage, which is exactly what Therion are going for. Pay special notice to the vocals of Thomas Vikström (ex-Candlemass), who has rightfully asserted himself as the prototypical Therion vocalist. (And yes, the video’s video-game-like look is also what brought us here.) – David E. Gehlke

Thorium
“Maniac”
Blasphemy Awakes
Mighty Music
Incorporating grainy band performance footage against a monk-like figure trapped in his own world, Scandinavian act Thorium with “Maniac” appear to embody many old school death aspects on this track. The eyes popping out, droll, and blood against the chalk-like artwork created beyond the brains and floating fork make for some intriguing imagery – almost in a haunting, Cannibal Corpse-like montage. The song itself opens in a slower, doomy way, the bass and low-tuned guitars serving notice for the melodic twists and eventual ramp up to comfortable, Grave meets older Dismember-ish pacing. An exhilarating lead break plus pit-stirring transitional riffing gives listeners hope for a solid effort once this album hits the streets in a couple of months. – Matt Coe (Thorium on Facebook)