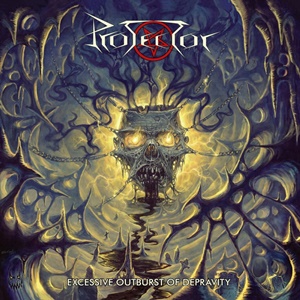 Originally based in Germany and transplanted in Sweden since their reformation in 2011, Protector are another of the original thrash guard that continue to produce primal music for their underground hordes. Their eighth studio album Excessive Outburst of Depravity may have newer players supporting band leader Martin Missy in this current incarnation, but the output, energy, and adrenaline-laced fury remains front and center over these eleven tracks. Coming off the adequate yet not surprising Summon the Hordes in 2019, you sense more attention to the finer details that allow the group to garner better retention qualities through successive, intense playback sessions.

A speedy drum fill and buzzsaw riff rhythm charge makes “Last Stand Hill” the ideal opener – Martin’s acidic roar and fiery word spew similar to what you’ve heard from Tom ‘Angelripper’ of Sodom taken through a mid-80’s death-tinged filter. Throughout the record you can expect steamrolling riffs of a mid-tempo to slightly faster variety and equally quick lead break work from Michael Carlsson that serves as a veritable battering ram to all senses – close to going off the rails yet swooping you back in with a melodic run, as “Pandemic Misery” and “Cleithrophobia” illustrate. “Thirty Years of Perdition” features lower churning riffs and a marching bass/drum template – Martin Missy intertwining some militant voices with properly placed screams, the intro moments containing mouth harp nuances for dynamic contrast. Protector also throw down some punk/semi-death blasts that can turn on a dime to d-beat hammerhead parts – “Shackled by Total Control” a roller coaster of a song where supplemental gang-styled background vocals plus another circular, emotive lead break should win most consumers over to the fold. Properly placing energetic numbers next to more brooding mid-tempo or anthem-oriented offerings keeps Protector in that old Bay Area meets Teutonic mode – when acts like Sodom, Slayer, and Master were coming up the ranks.

Slightly stronger than their last showing, Excessive Outburst of Depravity will appease most who love their thrash metal in your face, raw, and channeling the appropriate balance between aggression, angst, and headbang-worthy hooks.