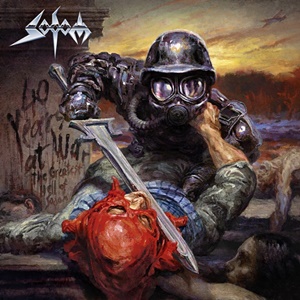 Milestones in metal deserve celebrations – especially in the case of veteran artists who now have a forty-year history as German thrashers Sodom recently passed. What makes 40 Years at War – The Greatest Hell of Sodom special is the hand-picked track list with one song from each of the previous studio albums receiving a re-recorded treatment from the current lineup. Beyond that, the quartet kept the songs in the original key, using the original lyrics, leaving the arrangements deliberately unchanged. It’s intriguing to hear the different combinations at play – the additional experience on hand, certain musicians never being a part of the first incarnation of these tracks, plus the natural production/tone advancements especially on the 80’s/90’s tracks.

Integral to the appeal of Sodom has been this spitfire attack that is primal, raw, and unforgiving – early on more speed/blackened in atmosphere, only to get a touch more refined as the decades passed. The early material surely gets a robust uplift when it comes to the current production values – “After the Deluge” and “Electrocution” personal favorites. Many of the 90’s records didn’t necessarily receive much notoriety stateside (probably as death/black metal usurped the thrash movement), so it’s great to hear the ripping “Body Parts” and punk-infused “Jabba the Hut” make the grade. By the 2000’s, what propels songs like “Genocide” plus “City of God” is the dual guitar activity from Frank Blackfire and Yorck Segatz, filling up the rhythm/lead landscape with thunderous chord progressions, the shredding breaks/ dive bomb action matching the heavy, cultural/militant lyrical themes to present maximum body carnage (or incessant neck whipping, whichever you prefer). Rounding out the more recent studio records “Caligula” as well as “Euthanasia” finish the main album proceedings, listeners will understand the Teutonic impact these gentlemen have left on a global scene ready to thrash into oblivion.

Bassist/vocalist Tom Angelripper would be the first to admit that Sodom may not have been the most technically advanced band coming down the pike – but there’s something to be said for heart, passion, and solid work ethics to reach the underground masses. 40 Years at War – The Greatest Hell of Sodom is a primer for those unfamiliar with the group – or a treasure chest to reward those faithful to the history and spirit of this originator to a genre we’ve all come to love.