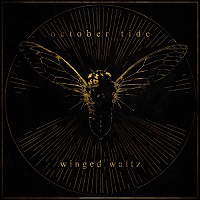 Congratulations should be in order for Alexander Högbom, for he’s done what no other October Tide vocalist has been able to do: make it to a second album. Obviously, we’re saying this in jest, for no Swedish melodic death/doom bands stands taller than October Tide. In fact, so formidable is the band, that a revolving door of vocalists has been unable to sidetrack them. That’s what happens when good songwriters are in the fold. But for Högbom and the rest of the October Tide contingent, Winged Waltz is another galvanized, striking step toward the deepest, most complex depths of dark metal.

As noted in our review of Thenighttimeproject, the side project featuring OT founding member/guitarist/main songwriter Fred Norrman, the man’s riffs have become increasingly identifiable with each passing album. OT’s song constructs certainly fall into labyrinthine territory, with Mr. Norrman pilling on one sidewinder after the next. It’s a full-on display from the jump, as opener “Swarm,” along with “Sleepless Sun” pack in those light-blocking, boulder melodies, many of which guide both songs through dark corridors. Desolate refrains comprise the fantastic “Nursed by the Cold,” while the elongated, grueling “Coffins of November” brings matters to an end much in the same way “Adoring Ashes” did on 2013’s marvelous Tunnel of No Light.

And yes, Högbom dominates a handful of these jams, most notably “Perilous,” where his barrel-chested roar somewhat belies the song’s pensive mood. But such a juxtaposition works like a charm with October Tide, who three albums into post-reformation life, are more of a realized entity than they were in their glorious Rain Without End/Grey Dawn halcyon days. Those two albums are unbridled classics; what October Tide is onto with Winged Waltz isn’t too far behind.