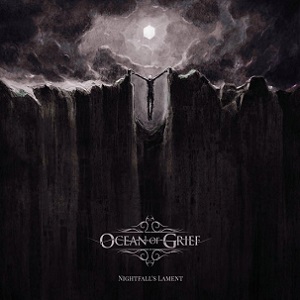 Pretty easy one to rattle off: “If Daylight Dies, October Tide and Slumber had a baby, it would be Ocean of Grief.” Yeah, it’s great to get down in the muck and mud with these type of bands, each of whom has a distinct flair for melancholy and melody, all under the same, big dark metal umbrella. For Greece’s Ocean of Grief, there’s little to suggest they have any of their own ideas — just an outline and a rather obvious ability to poach the best components of the above-mentioned trio on their first full-length, Nightfall’s Lament.

Even though there’s little, if anything new coming from Ocean of Grief, their interpretation of the melodic dark/doom/death sound certainly flies on Nightfall’s Lament. If anything, it’s a by-the-book, don’t-you-dare-try-clean-vocals kind of album, one that fundamentally, is everything you could ask for from a dark metal album, save for the fact it’s a bit lacking in originality. A minor qualm, perhaps.