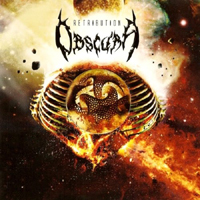 Reissuing Retribution makes total sense after the immense breakout year that was 2009 for Germany’s Obscura. Their Cosmogenesis album was a runaway critical darling, landing the band on a spate of international tours that brought their melodically-inclined technical death metal to the masses. Now that all of the hard work is out of the way (i.e. establishing oneself in the international metal community), we can go back into the vaults from 2006 with Retribution.

Repackaged (have you seen the old artwork? It’s ghastly) with three bonus tracks (all covers, no less), Retribution sees the German quartet rely heavily upon their Gorguts-meets-Death template. In fact, there’s a little too much serve and volley between these two bands

on “Nothing” and “Alone,” especially in then-singer V Santura’s Schuldiner-inspired vocals. Good thing Steffen Kummerer took over vocals, as Santura’s phlegm-laden vox are a tad too similar to Evil Chuck’s.

You can see the band isn’t quite sure where to go with tech-y death metal. Some of these jams are highly unconventional (see: “Unhinged, “Exit Life”) that bring the band’s notch-below of Necrophagist musicianship into the spotlight. Yet, there’s no melodic thrust like there was to come on Cosmogenesis and the pervasive Death/Gorguts influence is almost too identifiable, even if Obscura is better than most of their peers.

Worth delving into if Cosmogenesis is your bag, Retribution is not the proper jump-off for Obscura, but this reissue is a revealing look into a band still feeling out its sound. Good thing for growth, or we’d have another ho-hum technical death metal band on our hands. Obscura should remain on the tips of a lot of tongues for a while if they stay on the same path as Cosmogenesis. Retributionis merely a cursory glance back.