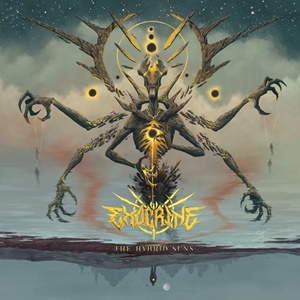 Advanced musicianship at dizzying speeds can lead many to check out early when it comes to the tech death revolution in metal. Others can’t get enough of the movement – which brings us to French quartet Exocrine. After releasing two records on Great Dane Records, they signed with Unique Leader to release Molten Giant in 2018 – making more of a footprint in this scene. Releasing their last album Maelstrom in June 2020 during the pandemic, it’s not surprising that the follow-up The Hybrid Suns hits the streets as we finally come back to some sort of normalcy.

Intertwining those rapid-fire blast beats, relentless double kick action, and fleet of finger lead breaks plus slamming rhythms this time around is the occasional female addition of vocalist Clémentine Browne – the serenity charms adding that melodic angle against the deep growls of bassist Jordy Besse. Meanwhile you’ll also get keyboard orchestration, neo-classical acoustic guitar action, and Middle Eastern rhythm nuances for “Burning Sand” that weave seamless around the circular lead tapping, progressive riffing, and dramatic groove to speed tempo changes. Eschewing any drawn-out intro, the musical prowess begins out of the gate during the opening title track, the djent-like instrumental breakdown and maze-like maneuvers tantalizing – Nicolas La Rosa and Sylvain Octor-Perez unwavering in their axe activities all up and down their fretboards. Injecting the right amount of heavy, chugging passages against the intricate, technical parts makes “Horns” and “Blast” standouts – the latter containing subtle outer space-like keyboard effects during the obvious ‘wall of death’ sequence near the song’s conclusion. The chemistry between these musicians allows them to go wherever the atmosphere of the arrangement wants to take them – combining slower riffs against blast beats, or jazz-like leads that weave in and out during the propulsive closer “Shrine”, drummer Théo Gendron even getting a brief four second solo spotlight around the 2:46-2:50 mark.

Those familiar with the work of Obscura, Beyond Creation, and Archspire will love The Hybrid Suns. And for those who love tech-death in a progressive way while injecting the right dynamic measures to not exhaust its welcome, Exocrine could be that band that has staying power. 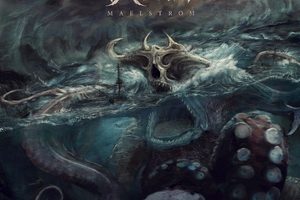