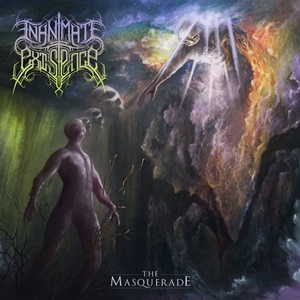 Productive since 2011, California act Inanimate Existence live for a blend of progressive-oriented technical death metal that has received critical praise as well as building a legion of followers. The Masquerade is the trio’s sixth studio album, another eight-track odyssey into magnificent musicianship, aural expansiveness, incorporating outer shades of tranquil bliss and aggressive chaos to heightened measures. Adept at execution through different tempos, the shifting of speed to heavy, crushing passages along with jazzy, clean transitions and twists beyond the dazzling blasts, tremolo runs, and vicious growls ensures plenty to wrap your heads around, absorb, and appease those who love intricate music.

The layers of guitar work from Cameron Porras mesmerize, knowing when to go from obliteration to peaceful ambiance in a nanosecond – check out the splashes, crunches, and devastation along with tasteful lead breaks for “Endless Waves” as well as the title track. Meanwhile bassist Scott Bradley escalates his chops to Obscura/Atheist heights, even in a spacious atmosphere during “Wandering White Halls”, taking the lead in surprising, circular portions of closer “Ending the Ritual”. Then there’s a tentacle-oriented tenacity and dexterity flowing from the arms and legs of drummer Ron Casey – unflinching in going from blasting to double kick/groove parts like a mathematical savant, ramping up the BPM’s to bullet train levels on “Buried Beneath Scars”, the deadly tremolo action given small reprieves during a doom-like instrumental mid-section before the progressive conclusion. Add in the deep growls from Cameron, and lyrical content surrounding personal human struggles and philosophical thoughts and you have the makings of a final product that seeks to entertain without overwhelming the listener.

Tech-death and progressive music isn’t for the faint of heart – Inanimate Existence balance solid musicianship and wow moments with distinct riffs, hooks, and catchy mechanics which is why they are garnering serious attention for their craft. The Masquerade serves up another consistent batch of songs that lovers of progressive tech-death along with ambient/atmospheric nuances should savor.