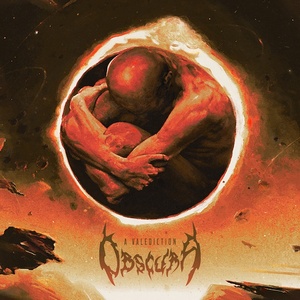 When it comes to the tech death genre, Obscura is always going to come to mind as one of the leaders in the field, with an extensive list of releases that pushed the genre forward, particularly early efforts Cosmogenesis and Omnivium.  As the growing field of tech-death shows, it’s not nearly enough to have spectacular musicianship to stand out, and this is where Obscura’s mastery of melody and dynamics come into play – especially here on A Valediction.

Obscura have long since proven their ability to play their instruments at a level that could knock out much of today’s competition.  So it makes sense that the last few releases have emphasized the melodic musicianship, and writing towards a ‘song-oriented’ vibe.  “When Stars Collide” is a perfect example of this, with gorgeous melodies that lace the otherwise intricate playing into something that has the same hook-y factor of a melodeath track (ironically, there are also cleans from Bjorn Strid to augment this factor).  Another nice improvement is that of the song length.  Obscura has really trimmed down their tracks into the 3-5 minute range (outside of the opener “Forsaken,” without dulling their grandeur.  “Solaris” packs a flourish of fretboard-dancing riffs and energetic tempos into a very compact three and a half minutes and it leaves the listener with a rush instead of an overdrawn ending.  The same can be said for the crazed soloing of “In Adversity” as it generates a slew of toe-tapping melodies surrounding it and some slight grooves.  Speaking of groove, as per the usual, there’s one Morbid Angel-esque stomper to cherish, this time in the form of “Devoured Usurper,” which carries that weighty darkness and elephant-stomping riffs and feels like one of the strongest of this style from the band since “Ocean Gateways.”

When it comes to progressive, technical death metal Obscura still sits upon the throne as the kings.  A Valediction champions a frenetic yet melodic sound that is far catchier and memorable than what their peers are putting out there, while still cherry-picking some of the best mind-boggling musical fireworks that the genre can put forth.