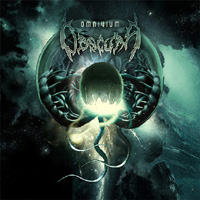 Widely considered to be the strongest new force on the European technical death metal scene, Obscura now must live it up the lofty expectations created after the overwhelming success of 2009’s Cosmogenesis. Such endeavors are always of interest here, for seeing a blossoming young band try to top its breakthrough album has proven to be perilous for many, and fruitful for a small few. If Omnivium is any indication, then Obscura are on the right path.

Employing the same formula as its predecessor, Omnivium sees the Germans pull out a spread of latter-day Death riffing, paired with the constant motion swirl of Necrophagist (whatever happened to them, by the way?). Pointed, sharp riffs are all over this thing, with ample dexterity and complexity to boot, usually resulting in a shower of solid ideas, like album opener “Septuagint” and the Morbid Angel-inspired “Ocean Gateways.”

Clean, spacey vocals manage to fill up album highlight “Prismal Dawn,” a song that is perhaps most evident that Obscura are curious enough to look outside the box for ideas on an even grander scale. “A Transcendental Serenade” follows suit, opening with an atmospheric acoustic guitar bit, then diving into a driving main riff and adventurous bass soloing courtesy of Jeroen Paul Thesseling, who could be the album’s most valuable player. If anything else, “A Transcendental Serenade” could be this generation’s answer to Death’s classic “Cosmic Sea” off 1991’s Human, even with the inclusion of clean vocals toward the very end, which are buried in the mix anyway.

The divide between American and European technical death metal is growing, with the Euros preferring to avoid the swath of modern metal (read: beatdowns) that so permeates American technical death metal. In the case of Obscura, finding an album like this, in this realm with such audacity and cohesion is going to be a real stretch. With no letdown to be found after Cosmogenesis, Obscura has another winner on its hands with Omnivium.