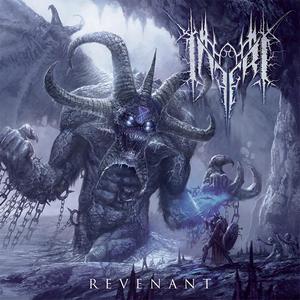 Arguably, it’s been a while since any new stuff turned up from the Inferi camp. 2014 to be exact, with the release of their third album, The Path of Apotheosis. There’s been a number of changes since then, most notably with the expansion of the band now having a vocalist in the form of Sam Schneider and new bassist in Joel Schwallier. The revamped Inferi hasn’t messed with their successful formula too much, but some growth is evident, ensuring that Revenant is their strongest release to date.

The frenetic, hyper-speed approach to Inferi’s technical/melodic death metal is lovingly intact. The sheer layering of the music is just as dense as previous efforts, and Revenant is another album that you are going to want to dissect away while listening. There’s a genuine excitement to listening, and re-listening, to the album. You are sure to come away with a new favorite portion or song with each thorough investigation. It’s that attention to detail that makes Inferi so good at what they do. You may be initially drawn in to a particularly memorable moment such as the glistening (yet brutal) melodies of “Behold the Bearer of Light” or the frantic intensity of the opening of “Through the Depths,” which offers an in-road, but it may be a bass-line or intricate lead that eventually sells you entirely on the album.

If there are two areas that seem like the band has pushed themselves, it’s the overall atmosphere and songwriting focus. There are more synths and mellow moments this time around, as heard in “A Beckoning Thrall” and “Malevolent Sanction,” where there’s some clear build-up instead of just laying into the blastbeats and spiraling riffs. It indicates their maturity as a band, and many of the nuances stated above seem to flow from this area – unlike many tech-based bands, there’s some ebb and flow despite the chaos, and the songs move gracefully towards a clear goal.

Inferi continue to challenge themselves to put forth a stronger effort than the last, and Revenant is sure to stand the test of time. As mentioned, listeners will end up getting more out of the album as they return to it. With the paralleled growth of their label, The Artisan Era, it’s high-time that Inferi got some recognition in the larger metal circles, which should rightfully come with Revenant.