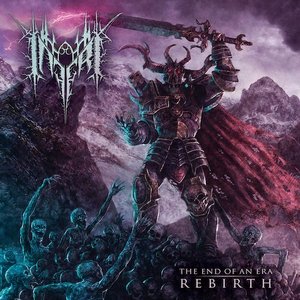 Back in 2009, Inferi wasn’t nearly as much of an extreme metal name as they are today. But, as this scribe’s first exposure to the band after the album’s release (and their temporary disappearance there following), there was something special about The End of an Era. The steamrolling speed undercut with some surprisingly catchy melodies made for a real adrenaline rush. A tough album to track down, the current iteration of the band (and undeniably the strongest to date) decided to not only re-issue, but go ahead and re-record it for those who may have missed out on it the first time around.

The most impressive piece about The End of an Era: Rebirth is how they managed to take what originally worked well and somehow improve upon it. A much stronger recording is obviously playing into the cards here, but even the performances around the table make for a tighter and more impressive album. The bass and drumwork are much improved and really give the album a different feel than the original. It brings the album much more in line with their previous two releases. Likewise, Stevie Boiser’s vocals bring some added variety to the music (admittedly, the vocals were the weakest part of the original – sort of just being there) and really elevate it. That said, the same sense of over-the-top speed is ever-present and is one of the things that really makes the album work. It can take your breath away, but at the same time, it’s so chock-full of dizzying melodies and solos that it’s quite easy to latch onto. Some of the older, melodeath pieces still sit in the mix, and mesh well with the technical flourishes that the band has gravitated towards in later times.

A shining example of what a proper re-recording should look like, The End of an Era: Rebirth stays true to its source material, but also isn’t afraid to allow some tweaks to make it better. For anyone who missed out on it and have since followed the band, it’s a real gem in its current form, and for those who did check it out – it’s well worth revisiting.