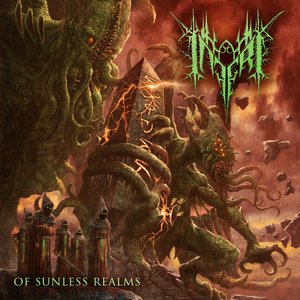 Even for those who only slightly enjoy technical death metal, the arrival of new material from Inferi should turn some heads. While their early days were a bit quiet, they’ve slowly gained quite the reputation for their ability to take hyperspeed melodies and arrangements and make them into something that’s both spectacular and enjoyable to hear. Of Sunless Realms is but a short and sweet little EP, but it continues to showcase why the band is at the top of their game.

With four songs and an interlude of sorts, it is just a taste but boy does it leave a strong impression. Notably, they can bring that sense of adrenaline-fueled euphoria with just as much finesse as ever, and if anything it seems like they’ve taken some extra time to build in some more epic qualities with some synths to make it feel even more impressive when they ease off the gas (see “Aeons Torn”). There feels to be a bit more change to the temp with these new tracks, and it does help to make them seem even more impressive when they go full tilt. Some of the slower melodies that they weave in during these sections quickly stand out and make you take notice of them (“Spellbound Unearthed Terror”), while the speed keeps the intricate riffing moving ahead quickly and the soloing is nothing short of impressive. Vocalist Steve Boiser shines as well, giving a varied as ever performance that feels like the missing piece of the band now that he’s able to tackle some new material (his only previous recording was that of The End of An Era rerecording).

Inferi continues to tickle the ear with symphonic and rousing melodies while delivering them at the highest possible speeds. It’s still just as much of a thrill as their music has always been, but they continue to find new ways to approach it to make it feel fresh and deliver some solid diversity within the fury. There’s a reason why Inferi continue to shine in this genre and Of Sunless Realms is another fantastic example.