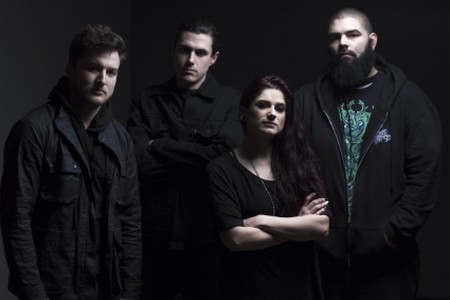 When people toss around the term supergroup, it has a tendency to lose its meaning. But such is not the case with Entheos, who seem to wear the title well. There’s Evan Brewer (ex-The Faceless) on bass, drummer Navene Koperweis (ex-Animals as Leaders), guitarist Malcolm Pugh (Inferi, A Loathing Requiem), and Chaney Crabb on vocals. When Primal hit last year, buzz hit the Internet immediately, due to the talent involved (back then it was Frank Costa on guitar). Some touring brought more attention, and the band was signed to Artery Recordings.

The full-length debut, The Infinite Nothing, takes the intricacies and aggression of Primal and ushers forth a more mature sound. A hard album to really pin down into one label, there’s unmistakable appeal for those into death metal and progressive metal. We were able to have a chat with guitarist Malcolm Pugh, the newest member of the group. There’s insight to be had about his inclusion to Entheos, how the band has developed, as well as some nuggets about Pugh’s very DR-approved acts in A Loathing Requiem and Inferi, not to mention his label, The Artisan Era.

Dead Rhetoric: Being the newest member, how’d you get taken into Entheos?

Malcolm Pugh: It was weird. I was at a show with Derek [Engemann] of Cattle Decapitation – he played through our town and Evan [Brewer] and I are from the same town. We were both at the show and just started talking and saying it would be cool to jam in a band together and were wondering why we hadn’t done it before, since we are from the same town. The day after the show, they hit me up about joining Entheos and it went from there – learning the songs to get out on tour. It was pretty unexpected and happened pretty rapidly. It fell into place though.

Dead Rhetoric: You were initially brought on for the one tour correct?

Pugh: Yeah, we kind of wanted to do a tour together just to see if I would fit in and mesh well with the other band members before we made anything official. I think about half way through the Black Dahlia Murder tour, it was time to announce that I was in the band. Everything was smooth and we played great together – we kind of just clicked immediately.

Dead Rhetoric: There seemed to be some buzz with you joining. Was it nice to get a bit of recognition after being involved with various projects over the years?

Pugh: It was pretty cool! I have a small fanbase from my other projects but it did bring a little attention to me through Entheos – jamming with all these great musicians. It definitely helped a lot of things move fast as far as musical projects and things like that. I’ve looked up to these guys for many years, so just to jam with them is an honor really. I’m still a fan [laughs].

Dead Rhetoric: With that in mind, with your guitar playing, what do you feel that you are bringing to the table with Entheos?

Pugh: With the album, it was a weird situation because the other guitar player had already tracked all the rhythms and it was kind of last-minute and I needed to learn songs. It was about 2-3 weeks before the tour. What was originally meant to be a guest solo turned into me doing all of the solos except for two on the album. I did one and they really loved it and we just started tacking them on as time went on. For this album, I only got to contribute to the tip of the iceberg with leads and stuff like that. Navene [Koperweis] and I began writing almost instantaneously when we got back from tour, making material that is a little bit more in my style and as well as Entheos style – bridging the gaps a little bit.

Dead Rhetoric: So we won’t hear that until the next time around…

Pugh: This album won’t have as much of my style as much as the future albums will. It’s still awesome; I really enjoy how it turned out. Even with my contribution being as little as it was.

Dead Rhetoric: I remember there being something in the press release saying that the songs for this album were a little longer. Was putting the solos into the songs a part of that?

Pugh: No but I think it gave the songs some texture I guess. The songs were definitely longer than the ones on the EP, and they are more mature sounding songs. With me being able to put leads on it, it added more of a different flavor to it. So it wasn’t so much length as it was just stacking up the texture.

Dead Rhetoric: From your perspective, how do you describe what Entheos does? It’s not really the easiest album to say “it sounds like this or that.”

Pugh: It sounds like something that is developing in its own way. It has a lot of influences from death metal and progressive ideas in it. It’s kind of hard – I would like to just classify it as metal. But in this day and age, it’s hard to do that. It’s not strictly death metal, it’s not strictly progressive metal or anything like that. If I had to put a genre on it, I would say maybe progressive death metal or something like that. It’s hard to put a place on it but hopefully it will figure itself out once it grows.

Dead Rhetoric: It’s kind of a compliment to the band too, because you can’t just listen to it once and say, oh it’s this!

Pugh: That’s definitely a perk. There’s no easy classification so it stands out. Hopefully it makes people curious.

Dead Rhetoric: Again, with your history with bands, what is the hardest thing about trying to get a new band noticed?

Pugh: I think trying to be original. You want to draw influences from your favorite bands and artists, but the key is to not make it so obvious and try to get it out to people with the best quality sound that is possible. It’s a tough call because there is a lot of competition with the Internet being so instant. It’s about being the best as you jam with your instrument while still maintaining someone’s curiosity and making them want to listen to your band as much as possible. It’s a double-edged sword with the Internet. There’s competition but people can get to you instantly. It’s just a matter of playing with the tools that you have and figuring out what works best for that band.

Dead Rhetoric: Entheos has some established people in it. Does that help in terms of getting your name out there? When Primal came out last year, it spread pretty quickly.

Pugh: I think it helps. Navene has his own solo project, so does Evan, plus all the bands they’ve been in. I think every piece of what someone is doing in any band, I think it’s important not just for Entheos, but other bands, to branch out a little bit and just get your name out as an artist. That will in turn, help your band and get a little bit of momentum. It’s important that as a guitar player, people know who you are. You can stand alone or be part of an entity. I think it definitely helped the band to get started and now it’s time to get the grind on. It’s definitely not easy, no matter what it is. Being in a band is still pretty tough.

Dead Rhetoric: How do you feel about, at the same time, every band having people in them from different groups having the supergroup tag?

Pugh: I’ve heard that being tossed around with Entheos and I think it’s a good thing for us. Like I said before, these guys are incredible. Chaney [Crabb] is a great vocalist and frontwoman for a band. Navene is one of the best drummers in the metal community, and Evan – he’s super sick. It kind of fits, but in a very modest way. I don’t mind the tag at all, it’s just one of those things that just come with the territory with having a lot of stand-alone musicians in a project. I welcome it, bring it on [laughs]!