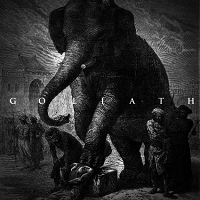 A riff to Imperial Triumphant is like puddy; it can bend in any which direction, is capable of being twisted into form, and ultimately, can take on any which shape it chooses. They’re not terribly far-flung from those Deathspell Omega rascals (an influence so prevalent that it was name-dropped in the band’s accompanying bio), but maybe the band’s New York City locale has something to do with the oppressive nature of the two-song Goliath release, one of those good-idea releases that bands should do more often for kicks.

Like on their 2012 full-length Abominamentvm, Imperial Triumphant find no means of being conventional in the black metal confines. The guitar ideas are clearly otherworldly – dropping in live attacking birds on their prey (“Sodom”), all the while noise-metal enters the fray, making the track a noisey black metal du jour. “Gomorrah” has less recklessness to it, but is highlighted by rolling, hurky-jerky speed portion that is pure abomination. And for two songs packed in at over 12 minutes, one will get more than enough ideas…maybe too much for some. Such things happen when you throw caution to the wind.