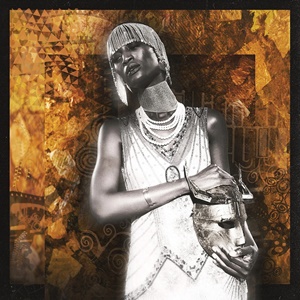 “For generations, the reaching skyline of New York City has been a symbol of man’s constant effort in reshaping the Earth”. The same can be said for NYC avant-garde mavens Imperial Triumphant and their impact in music as a whole. This trio of golden masked marauders have blurred the lines between black metal and jazz fusion and have become a peerless act in achieving this delicate balance of beauty and barbarism.

Spirit of Ecstasy, their brand-new LP on Century Media, comes crashing out of the gate with “Chump Change”, a maelstrom of tribal beats, spleen-ripping riffs, and air-raid sirens that signal the bands intent: to crush skulls into dust. A soaring solo wraps things up while everything seems to crumble around the band before they come back for one more race-to-the-finish riff fest.

Elsewhere on the album, the band hasn’t shied away from melding disparate ideas without sounding forced. They have become masters at their craft, and with esteemed guests gracing their records, Imperial Triumphant has certainly delivered another record that’s just fitting for the chaos that’s engulfing this world. A surprise collaboration with the purveyor of elevator music, Kenny G himself, has yielded “Merkurius Gilded” a scorching track that definitely made the popular saxophonist cool in my eyes. The operatic “Tower of Glory, City of Shame”, the chaotic “Death on a Highway”, and the jazz-fusion circus of “In the Pleasure of Their Company” just further showcase the astronomical heights that Imperial Triumphant has reached, ensuring that any usurpers to their throne have a lot of catching up to do.