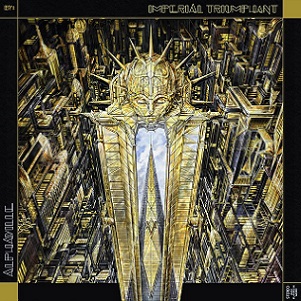 Monstrous, terrifying, impressive. Three terms that suitably describe both the breathtaking album art of Alphaville and Imperial Triumphant themselves. A band that has been on the cutting edge of madness for the better part of the last decade, Alphaville sees their unique brand of horrifying, urban extremity reaching new and even more avant-garde heights. All while, somehow, making the formula somewhat more accessible this time around (believe it or not).

Imperial Triumphant, much like their brethren in Pyrrhon, seem to define outré. The music is crazed, chaotic, and certainly unpredictable. It’s eerie, and it truly seems to conjure a musical landscape that feels dark, seedy, and oppressive. Likewise, it propels itself forward from Vile Luxury and you can truly feel an urban (read: NYC) vibe as you listen to the music. The opening to “Transmission to Mercury” makes one imagine an underground jazz lounge, complete with smoking P.I. sitting in the back on a dreary night. Of course, it eventually accelerates full-tilt into insidiously spiraling guitarwork, frenzied blastbeats, and menacing growls. But it all works, because of the avant-garde atmosphere (some of the brass eventually infuses itself to the track again later, amid blasts and whirlwind riffing) that stays throughout. This is where that increased accessibility comes in, even as the band continues to up the stakes with even more dissonant and dizzying musicianship. Tracks like “The Greater Good” will come at you with a gargantuan tone, but there’s also a more cinematic quality to them as well which makes them feel more compelling and immediately gratifying. “City Swine” also hosts a grimy, yet oddly inviting vibe to it as the music swirls around the mid-tempo (not to mention special guest Tomas Haake’s killer taiko drum segment). Oh, and don’t forget the barbershop quartet on “Atomic Age!”