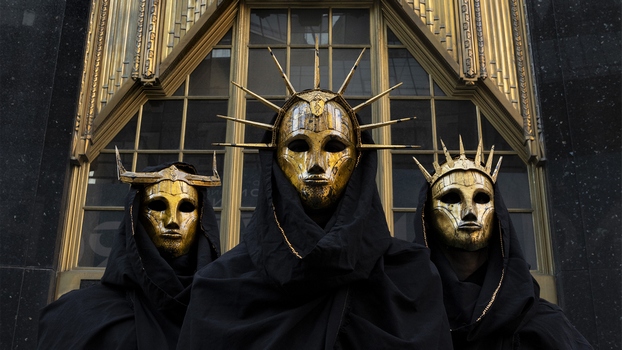 With a few releases under their belts at this point, New York City’s Imperial Triumphant have made the case for them being forward-thinkers and unafraid to challenge the listeners conceptions about heavy metal. Their music is densely-packed and avant-garde. It utilizes eerie urban landscapes, unsettling imagery and sounds, and incorporates non-traditional metal instrumentation where needed. There’s always a lot to unpack, and their latest in the form of the upcoming Alphaville sees them take another leap ahead sonically, while continuing the legacy that now stands before them. Guitarist/vocalist Zachary ‘Ilya’ Ezrin spoke with us for a few minutes about the release (and it’s jawdropping artwork), inaccessibility, pushing boundaries, and more below!

Dead Rhetoric: How does Alphaville stack up to your previous releases?

Zachary ‘Ilya’ Ezrin: I’d say that it is our best effort so far. It’s the most refined version of ourselves. We really strive to not copy any previous work. We aren’t interested in making Vile Luxury II. This is a work that can stand on its own. We are all really proud of it.

Dead Rhetoric: It’s funny that you mention striving to not repeat yourselves – each one of your releases really feels different. How do you feel that the band has progressed over the years?

Ezrin: I feel like we have progressed pretty naturally, as far as bands go. If you listen to our full catalog, you can see our earlier work is still very much – you can see all of our influences on our sleeves. As we have progressed, we’ve slowly developed our own sound and material that sounds strictly Imperial. With this new album, we have really taken it another step forward to building our own world.

Dead Rhetoric: Do you feel that you’ve latched onto something special with the urban/NYC setting approach?

Ezrin: Completely. I think it’s important for me and the audience, and a lot of bands. It’s the full package. I strive for authenticity. You can’t really go wrong if you are a band from New York City singing about New York City.

Dead Rhetoric: There’s a lot of ‘non-metal’ instrumentation within the music. How do you weave those elements in?

Ezrin: We all have past experiences and training with music composition and scoring. When it comes to that, you have to have a broader palette when it comes to instrumentation. Nothing is ever forced. I think that’s the key to our sound in the songs. These x, y, z instruments may sound great, but does it fit on this particular song? Do we need it? When it comes to these non-metal instruments, it’s a matter of knowing what they sound like and thinking, “This song is great, but it really needs a disgusting bass clarinet solo or bari-sax” – something like that. A song is a song, and without all the ingredients it is not complete.

Dead Rhetoric: You have worked with Colin Marston since the beginning, I believe. How important is the band’s relationship with him?

Ezrin: For us, it’s been great. Working with him over and over, we have developed a great relationship and it makes things move more smoothly. He knows before we get to the studio the way we want things set up, because he knows what we are trying to achieve. He’s a like-minded individual. We all share the same ideas, so it’s easier and easier every time we go.

Dead Rhetoric: The cover art for Alphaville is pretty amazing. It really stands out. Could you go into some of the details about it?

Ezrin: I think we were deciding with [Zbigniew] Bielak, the artist, and he really wanted to do a cover for us. I had seen some of his previous work and I was really impressed. He has an architectural background, so we knew it would be a pretty good fit, as far as his style matching our aesthetic. A lot of it was his idea to be honest. The multiple perspectives – it’s super long because it’s going to pan out a gatefold vinyl. When you open up the vinyl it will reveal the entire artwork. Originally he wanted to do a triple gatefold, so it would be even taller. But the label was not too keen on paying for such a production. But we have this double gatefold that looks so cool. I really appreciate the creativity that goes into trying to develop a cover that is so interactive.

Dead Rhetoric: It’s not often you see something like that, particularly in the more extreme scene. It really catches the eye.

Ezrin: I would say, to anyone reading this, to buy the vinyl. He has put a lot of really cool easter eggs and hidden symbols/messages within the artwork, not just within the cover but also the panels and stickers and everything that goes into making a vinyl. It’s so intricate and really interactive! It’s great to really look at it, as well as listening to the music.

Dead Rhetoric: You were talking about the band and the ‘whole package.’ How important is the imagery surrounding the band as well?

Ezrin: It’s very important. I think it’s important for any band, but we take it very seriously. I really appreciate the creativity in more ways than just music. For me, it’s a great pleasure to work on stage costumes and productions, and developing all sorts of merch/vinyl. If it all syncs together, it makes the experience for the listener more enjoyable.

Ezrin: It depends on where we are playing, but we push for wild light shows, stage projections, and soon, once we can afford it, we’d love to get stage props and interactive experiences with the audience. We want to create a wild live show. Even at the moment, we are doing a lot of DIY stuff people are loving. It shows that we give a shit. Every little thing counts I think.

Dead Rhetoric: Any meaning behind the Voivod and The Residents covers?

Ezrin: The label said they wanted some bonus tracks, and I wasn’t into the idea of having songs that I wanted on the album to be bonus tracks, so we decided to do covers. So it’s like a secret little extra tid bit. Steve [Blanco] really wanted to do a Voivod cover and after a very short period of time jamming on that tune, it became clear that it was going to be awesome. Where we would take it would be making it our own instead of doing a note-for-note cover, but really getting weird with it.

The Residents thing was my idea, because I’m a big fan and I just love it. They don’t give a fuck. They are going to be the weirdest and most challenging band. Their guitarist, Snakefinger, is actually a really big influence on me. His style of playing with absolute chaos. It’s not all about playing perfectly, or in time, it’s about the actual delivery and the sound that comes out of it. I really appreciated that. We tried to do something that was our style but also incredibly bizarre.

Dead Rhetoric: You had a pretty fantastic video that you put out for “Swarming Opulence” from Vile Luxury. Are you planning on doing another one, given the state we are in now, for Alphaville?

Ezrin: Yeah, that’s actually a grand tragedy. We were set to shoot a music video for this upcoming album that would be on that same level of production and it got canceled last minute due to the virus. We are currently working with some animators to develop an animated music video in the meantime since we need content. All forms of creating can be interesting, so we are working on that now. Hopefully NYC can open back up soon and we can keep making the music video, because the treatment for that is really sick and I think fans will love it.

Dead Rhetoric: What are your thoughts on inaccessibility in extreme music? Obviously, a band like yours isn’t one that is going to approach radio or people necessarily grooving along to it in their cars in the grander scale of things.

Ezrin: I disagree with you. I think it’s all a matter of context and delivery. Metallica is on the radio, and they were advanced for their time, and bands before them like Black Sabbath and The Beatles were considered raw noise. Anyone who is doing something a bit differently for the first time in their generation, people are going to think that its unlistenable or challenging for the masses. We’ve put a lot of effort into this album, in particular, into crafting an album that is true to ourselves and very heavy, but it has certain elements that make it more accessible to your average Darkthrone fan, or someone who isn’t really into the super-dense shit.

I think the aesthetic of the band gives a huge crutch to the new listener, because it allows them to dive into a preconceived notion of what they expect and what it’s about. If you watched a horror movie, and no one told you it was a horror movie, the first hour would be pretty boring. Usually nothing happens, but you still watch because you know something terrible is coming. That’s an analogy that comes with the visual aesthetic pairing.

Dead Rhetoric: I see Imperial Triumphant as a band that pushes boundaries. Do you feel there are any that you shouldn’t push, or do you go organically and see what happens?

Ezrin: It’s hard to say. I don’t think there has been a moment with the band where someone brought an idea to the band that was out there and we said no, this is a boundary we shouldn’t push. It’s like you said, finding what you sound like and what you want to play and how far you can take it. Everything we do is organic and not forced, so it’s always going to seem authentic and real.

Dead Rhetoric: Given your innovative status, what would you like to see in heavy metal as we move forward?

Ezrin: Honestly, I have been enjoying the trajectory that it’s been heading. I think there are a lot of forward-thinking bands out there right now making really interesting stuff. More importantly, I feel like the fans and the general metal audience are more accepting of this kind of new form of thinking and avant-garde stuff. They are more interested in it than they ever were. It has created a larger platform for the artists.

Dead Rhetoric: You’ve hit a couple of these points already, but is there anything else going on for the band at the moment?

Ezrin: We currently have Devastation on the Nation rescheduled for next year. We have all of our August European festivals that were postponed to next year, so we are going to try to plan something grand around that. We are also looking into November of this year, trying to at least hit the east coast. We are dying to play, and I feel like fans are dying to see some live music. Fingers crossed that things get better and we can resume touring.