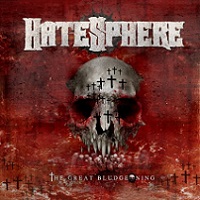 Nothing like a trial by fire for this Danish thrash/death quintet, having to replace your vocalist before your biggest North American tour to date opening for the Black Dahlia Murder in the winter of 2010. But plow ahead is the motto of Hatesphere, who finally settle in with As We Fight singer Esben Hansen and a new bass recruit Jimmy Nedergaard for their seventh full-length,The Great Bludgeoning.

The aptly-titled The Great Bludgeoning gives Hatesphere more dynamic separation, exploring their slower, heavier tendencies while not forsaking the aggression and speed sides that are the band’s stock in trade. “Resurrect With A Vengeance” opens with Peter Lyse Hansen’s high-end guitar squeals and then merges with rhythm guitarist Jakob Nyholm to deliver this crushingly slow series of riffs, almost an underground equivalent to “Davidian” from Machine Head. The double barrel opening of “The Killer” and “Venom” prove there’s no loss of velocity or viciousness in the band’s style. If anything they’ve upped the adrenaline ante due to the crisscross touring escapades.

It’s natural for European bands to gain influence from other artists when on the road, but the key is always to take those little nuances and incorporate them logically without watering down your sound. When Esben roars that he “Loves the smell of death in the morning” for “Smell of Death” as drummer Mike Park shifts up and down his snare/double bass duties, the five musicians have a common goal at hand- pure metal power the Hatesphere way.

Without a hint of alternative, clean Depeche Mode-like melody in these nine tracks, The Great Bludgeoning should satiate the legions of death/thrash maniacs and possibly expand their foothold with North America.