Esse stated prior to the recordings: “You can look forward to 40 Minutes of HATESPHERE as you know it, however, seasoned with a few surprising delights! Who, for example, would expect to hear blast beats on a HATESPHERE record?”

They documented the recordings in form of a studio diary, hosted on Metalized.dk and HornsUp.fr, respectively.

The guys seemed to have a pretty good time while recording the new album – the fantastic atmosphere at the Antfarm Studios and the collaboration with Tue surely needs to be credited for this, among others.

New Hell was produced, mixed and mastered by Tue Madsen and will also be available as a limited edition digipak with two exclusive bonus tracks.

The stunning, and quite dark artwork was created by Niclas Mortensen (Amon Amarth, As I Lay Dying, Protest The Hero, Bring Me The Horizon, Whitechapel).

New Hell will be released on November 20, 2015 via Massacre Records. 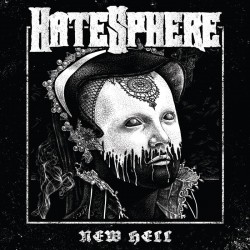