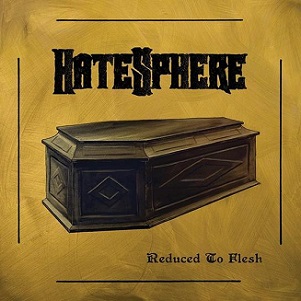 It wasn’t on the radar of many in these parts, but Hatesphere’s 2015 New Hell was an unbridled Euro thrash gem, spiteful, vertical and partially melodic, really just running the gamut of what the Danes have done as well, if not better than anyone in this department since the early 2000s. There’s always this propensity to hook these guys around Dew-Scented and Legion of the Damned and while both are of value, Hatesphere has a far better track record, especially their somewhat recent Napalm Records era. But, Euro thrash doesn’t sell like it used to or should, so the Danes are back to their original label home, Scarlet, for the release of their 11th studio album, Reduced to Flesh.

As has been the case for most of their studio albums, Hatesphere enjoys the serve-and-volley of d-beat pummeling with a good mosh twist. It’s about as close to a formula as the band has, although you could pick out founding member/guitarist Peter Hansen’s guitar playing rather easily. His choppy, almost percussive brand of playing still steers the band as things get underway with “Corpse of Mankind,” a pretty standard opening cut. In between thrash marches and Slayer-ized tempo pushes, vocalist Esben “Esse” Elnegaard Kjaer Hansen spits of societal ills and the power-mad, sometimes getting a little juvenile with his barbs, but, point taken. Even for a bunch of cagey vets, Hatesphere hasn’t lost their zest or spite.

The barreling “Ruled by Domination” and “Despicable You” (surely a play off the movie title “Despicable Me”) serve up the best moments on Reduced to Flash, an album that doesn’t quite match its predecessor. That’s a tall order, but so is maintaining Hatesphere’s thread of consistency. We’ve barked about this before, but if we had to point and choose and Euro thrash band, it would be these guys all the way.