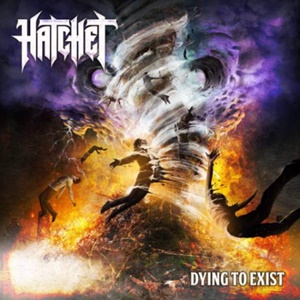 Newer thrash bands often struggle to attain their own identity – choosing to ride the songwriting and influence coattails of their heroes, just packaging it up with modern tone and production values. Through fervent touring opportunities (including seeing the band open for Metal Church and Flotsam and Jetsam on separate runs during 2016), Hatchet have been one of those younger bands that seem to be carving out a slow building niche of followers, even with records that can go from solid (2013’s Dawn of the End) to sub-par (the follow-up Fear Beyond Lunacy). Now album four Dying to Exist appears, with the resurrected Combat Records imprint in tow – and the underlying theme seems to be that through natural seasoning and comfort the band understand how to ingest modest amounts of harmony and melodic moments amid the conventional thrash backbone to really put their best foot forward in quite some time.

At 31 seconds, the intro “Unraveling Existence” contains a twin guitar charge that is reminiscent of Judas Priest or Vicious Rumors more so than thrash, spilling into the galloping nature of “Genocide” which fluctuates between Death Angel-ish mid-tempo parts and Iron Maiden-esque subtle twists and transitions – while never relinquishing the mandatory raspy screams and gang background vocal emphasis for the key chorus moments. Julz Ramos and Clayton Cagle really up their axe game throughout, layering their rhythms and lead breaks with this traditional underpinning beyond just going off to the speed races and being as flashy as possible. Check out the buildups and aggression for “Desire for Oppression” as well as the swinging rhythmic fusion throughout “Back into Dust” for two examples of where Hatchet hone in on proper songwriting hooks and mechanics that translate into stronger retention possibilities. The maturity present in the dynamic “Final Sanctuary” also is a breath of fresh air – great double kick to groove combinations along with this elevated bass/guitar tenacity that reaches into blackened/progressive edges instrumentally (almost hitting Vektor terrain). Relatively compact at 43 minutes and change, the record ends with a Vio-lence cover of “World in a World” – Julz obviously sounding more Kreator-ish vocally than Sean Killian’s maniacal, one-of-a-kind delivery, but it’s still driven in that potent manner that takes an early 90’s classic and makes it fresh for the legions not familiar with that band’s efforts.

Those who dismissed many of Hatchet’s material as derivative in the past, give Dying to Exist that second or third look. They’ve really upped their game, and hopefully continue on this path as they could climb the ranks a la Havok or Warbringer based on this output.