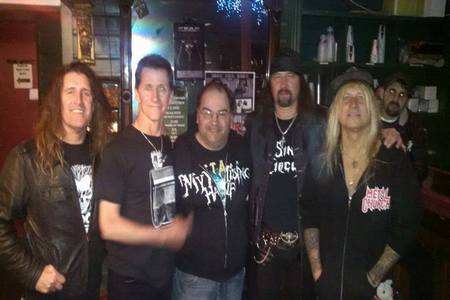 Fear struck the hearts of many in the thrash community when Metal Church fired David Wayne – especially considering his one of a kind screaming propensities on those first two studio albums. Fortunately, guitarist Kurdt Vanderhoof found more than a suitable replacement in Mike Howe – as Blessing in Disguise kept the good times rolling in the 1980’s and an album this scribe wore out a couple of times in the vinyl/tape years. Fast forward a couple of decades, as Mike comes out of music business retirement to front Metal Church once again – hot on the heels of a worldwide charting comeback in XI, this brief three week US tour taking them through the East Coast to Mid-West as they prepare to bring their wares overseas.

Taking a road trip to Poughkeepsie, NY on a Friday for the show, it would be the first time in three years visiting this venue (U.D.O. the particular reason for that trek). Already hearing a good buzz about the band’s after show free meet and greet policy, as well as Mike’s voice still potent like the late 80’s/early 90’s, hopes are high that newcomers and veterans will partake in another memorable outing for these seasoned musicians. Before doors open the patrons had to deal with homeless stragglers hoping for extra cash (many of which only brought plastic), and even got to partake in a spontaneous prayer (me thinks one in particular saw the band bill and thought we needed some extra support) – you have to love how metal heads handle such strange occurrences.

The first of three local openers, Dark After Dawn had a team huddle before storming the stage with their brand of traditional thrash and groove metal. The four-piece has a guitarist/vocalist in Maruf Kamal that has a great blend of Araya-raspiness and Rob Flynn-like bark, while musically they are adept at stirring up some energy and thick riff antics. The early attendees were pleased with the band’s Slayer meets Machine Head in an Iron Maiden alley sound. The same could not be said for Christian Gisondi Music – a more alternative hard rock band that had a few people shouting for ‘Slayer’ in between songs – even though vocalist Christian Gisondi proclaimed a love for Megadeth and the Reign in Blood men during their set. By song four he announced the five-piece would be playing a metal song – but distortion and groove does not necessarily equal metal though. Imagine Good Charlotte, Fall Out Boy, and modern hard rock coming together – it wasn’t pretty, and definitely proof that certain promoters will take on any band that can move those ticket sales for nationals.

Painmask finished off the New York entities for the evening in raucous fashion. Clearly an upstate NY favorite, their crossover hardcore/metal sound had me thinking of Life of Agony, Biohazard, and Pantera. Their songs got plenty of pit approval, and the vocalist seemed very pleased by the 300+ strong in attendance at the venue. Hatchet from San Francisco, California reminded people of the speed, fury, and twin harmonies that put the Bay Area thrash scene on the map through their quick hitting 30-minute set. Concentrating on selections from their latest two albums Dawn of the End and Fear Beyond Lunacy, the furious snare/ double bass action from Ben Smith as well as the frantic tapping and building chord progressions from Clayton Cagle and Julz Ramos kept most riveted – if not bouncing around into each other. “Living in Extinction”, “In Fear We Trust”, and “Fall from Grace” are three of their more memorable moments. Exodus, Slayer, and Kreator would be proud of these gentlemen in helping to keep the spirit, speed, and adrenaline overflowing in thrash.

And then there is Metal Church. Pulling together a replacement guitarist on short notice is never easy (regular second guitarist Rick van Zandt having surgery for a detached retina) – but TSO/Savatage axe man Chris Caffery is a pretty good get when you need one. A packed audience filled with pre-teens to 50-somethings, we never expected to see Mike Howe back in the band after 20 plus years away from the scene – but boy did he and the band deliver. Opening with “Fake Healer”, his voice has not lost any power or soul, sustaining every scream just like it was 1990. Their 13 song set list covered a little bit of everything: the new album XI with “Reset”, “Killing Your Time”, and “No Tomorrow” as well as older David Wayne-era material like “Start the Fire”, “Watch the Children Pray”, and “Beyond the Black”. The majority of course wanted to hear the Howe material, and we would get 7 songs from those 1989-1993 records – including “In Mourning”, “Gods of Second Chance”, “No Friend of Mine”, and “Date with Poverty”.

The band genuinely appeared thrilled by the reception and thankful for the feedback they would receive. Mike Howe is a perfect front man – cavorting with the crowd, fist pumping, hamming it up with his bandmates as well as The Chance security staff, and hitting every note the way we want to hear live. Sure many would be happier to hear a bit more Metal Church offerings (cue the gentleman right of me, who shouted for “Metal Church” at the conclusion…of every song!), but there’s always the next tour, right? Metal Church to me always has straddled the lines of solid US power metal, traditional metal, and of course thrash – probably why they are able to bring out an equally engaging cross section of the metal community. On this tour, they are proving their worth, and be thankful that there is another veteran band that can execute on stage night in and night out.