Wednesday, 1st May 2013 By Kenneth Gallant 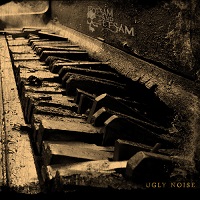 I will openly admit to being a longtime Flotz fan, so it pains me to say the band is slipping a bit. Maybe I was expecting so much more, especially since guitarist Michael Gilbert and drummer Kelly David Smith have come back to the fold. For me it meant the Quatro era line-up reunited, so I was hoping Ugly Noise was a chance for the band to return to that core sound of a band firing on all cylinders. Sadly that is not the case here and this new release is actually a disappointment for the most part.

Flotsam and Jestam actually started this recording without a label, so anchoring the resources of Pledge Music was a smart way to reach out to their fan base to help them raise funds for a DIY project that seemed like a novel idea. I know it sounds like a win-win situation, but the majority of the music falls flat and I am scratching my head for a plausible reason to feel this way. There are some traces of generic palm-muted thrash rhythms in some spots, but nothing exhibiting the complexity or originality found on Quatro.

It might just be that I am unfairly holding Ugly Noise up to past standards, but as a fan I wanted more than I got with this release. The cheesy electronics found on “Cross the Sky” and “Run and Hide” don’t help ether and the experimental elements with the use of piano on the opening track only serve to muddy the aggressiveness in their overall sound. The one bright spot for me is the voice of Eric A.K., who continues to remain sounding as vital as ever, but it’s just too bad that his band mates couldn’t keep up the same torrid pace.