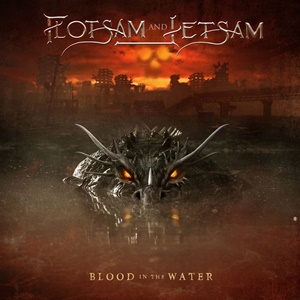 Grasping attention from a second generation of thrash followers who weren’t born during the band’s initial ascension from Metal Blade to Elektra/MCA major label ranks, Flotsam and Jetsam prove their creative juices and thrash platform has viable staying power. Most old-timers hold records like Doomsday for the Deceiver plus the follow-up No Place for Disgrace in elite esteem – but there have been other records in the catalog worthy of quality playbacks (put Cuatro and The Cold here from this scribe). Ever since reapplying a workhorse touring/recording schedule that saw the band on bills with Overkill, Testament, Sepultura, and Destruction among others in the past decade, the machine keeps rolling to the delight of everyone involved. Blood in the Water as the 14th Flotsam and Jetsam studio record allows the converted (as well as newbies) ample chance to absorb another series of solid metal tracks in a tightly constructed twelve-song juggernaut of energy.

Between the expertise of instrumental abilities within the quintet and placing the right songwriting acumen as far as transitions, additional dynamic contrasts, and layers of sonic elements to build interest from first to subsequent listens, there’s plenty to point out for earworms. The machine-like precision of drummer Ken Mary is a valid starting point – his bag of hits, tricks, lightning quick feet and hands makes “A Place to Die” and “Grey Dragon” delightful to absorb, study, and attempt even in air simulation sequences. Newest member Bill Bodily as a bassist doesn’t sit quietly on the sidelines – his progressive bottom end thickness front and center in the mix right out of the gate for the opening, harmony-driven title track. The guitar tandem of Michael Gilbert and Steve Conley deftly throw in the potent mix of racing rhythms and seasoned metal breaks- as well as some melodic clean hypnotic parts that make “Brace for Impact” another early standout. Keeping the songs chugging along at a tight four to five-minute clip doesn’t diminish the intricacies or innate nature to the right tempo change, harmony addition, or key Eric AK ‘wow’ vocal aspect – the man has leather lungs, gritty textures, reaching for the right low and high notes during a somber “Cry for the Dead” as well as evoking some semi-chanting aspects to “Undone” that tantalize and mesmerize in mysterious ways.

Blood in the Water assures Flotsam and Jetsam continual top of mind presence when it comes to high quality melodic thrash – a reliable first wave act that wants to develop new material that adds depth to an already ace discography.