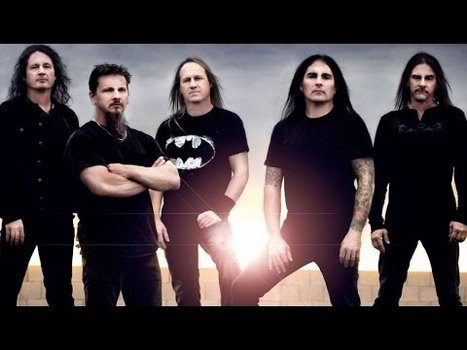 Dead Rhetoric: You recently toured Europe with Destruction, Enforcer, and Nervosa. How did the band deal with being on five different tour buses due to the breakdowns and burn-ups- and what exactly happened with the scary situation at the gas station in Belgium regarding racial and political tension?

Spencer: Hmm..we were actually on two tour buses to begin with. The tour was originally supposed to have a 24-bunk bus, the bus wasn’t ready so we thought we were getting a new bus built for us. Destruction had a 12 bunk bus, and we shared an 18 bunk bus with Enforcer, Nervosa, and Flotsam. That lasted 3 ½ to 4 weeks out of the 5 ½ week tour. Then we all joined up together when we left the Netherlands, and then all 22 of us were on that 24 bunk bus, but it wasn’t a new bus. So Schmier is all pissed off, this isn’t right. Two of the upper bunks actually collapsed on the people below them. I think we were into our fourth or fifth show with this bus, the next to last one in Belgium. We had a break down in Belgium, we all take taxis and we shuttle us four at a time to the nearest gas station. We weren’t concerned about what neighborhood we were in or anything, we are in Belgium. We noticed it was a primarily Arab or Turkish community, and a lot of people were automatically giving us looks because we are a bunch of long-haired musicians. We had three people from Brazil, one from Argentina, Belgians, Germans, Swedish people- and then five Americans, so we are all talking in English as that was the universal common language. They labeled us all 22 as Americans. A lot of simulations of machine gun fire, a lot of angry guys wearing an American flag, Muhammad Ali shirt and telling us how America sucks- then why are you wearing an American flag, dude? Some of them are drunk, so it wasn’t a Muslim related thing- to me it was more of an Arab related thing, and we were in their turf. We could have had the same thing happen in Detroit- it was a community that they felt that we didn’t belong in.

We could see they were making phone calls, and they were bringing more people in. They had 15 people in the parking lot waiting for us to come out. We have four women with us, and how do you protect everyone? This was like 5 to 6 am in the morning, by the time it was ramping up. We found a hotel maybe 7 miles away and we all get a room there, back charge the bus company to charge all of this stuff. We got out of there safely, luckily we had an Argentinean soundman, he lives in their Muslim community so he was able to say that and diffuse the whole cluster of four guys. The problem is that was wave two, you have wave three and it was just waves of different people starting the whole anger all over again. The more guys there were, the bigger the guys showed up. When you read about the news articles of what’s going on in Germany, what’s going on in France, a friend of mine posted on my post where she got lost in Brussels. A woman was getting sexually grabbed, she thought she was going to get raped and killed because her GPS took her into the wrong neighborhood- she’s a bass player out of the Bay Area. It was a pretty tense situation and the last thing you want to do when you’ve been up for 24 hours is deal with that.

As far as the shows, we had six sold out shows, Barcelona, Lisbon. Great crowds, Schmier treated us really well. You never know what the headliner band is going to do, and we all clicked. Schmier made it a good environment, he took care of us- he didn’t have us move any gear, he shared the dressing rooms with us. Nothing to trip on in that regard. Fernanda from Nervosa is just a killer front woman- you watch her in photos and her expression is different every time.

Dead Rhetoric: How does it feel to have multi-generational appeal, with families showing up together at the shows? And what have been some of the most memorable tours/shows with the band?

Spencer: As far as the generational thing, the one that stands out is a young man who would tell us his dad was playing Flotsam & Jetsam when he was a kid in the crib, so he grew up and became a Flotsam fan. The father and son were at the Whisky show, and just to see the son have as much passion for the band as the dad. Even in Europe- like at Keep It True, seeing little 15 year old fans wearing their sleeveless, denim jacket all patched up- their dad is right behind them with the same denim jacket all patched up. The children are embracing their parents music, and it’s a cool thing. Even if the parents weren’t into it, there’s this generation of teens and early twenties where they can look back and see the power and originality of the rawness of that music. It’s not sterile, digitized, where it’s cool to hear “Raining Blood” or “Ride the Lightning” and say- ‘that’s cool’. You’ll never get that again- the newness of the genre isn’t there anymore. They are connecting to it- the fact that they respect us enough, they want to catch us, follow us, buy CD’s, buy t-shirts.

Dead Rhetoric: Is it a scary situation to see bands today often relying on backing tracks to replicate what’s been done in the studio on live stages?

Spencer: For some bands, sure. The only backing tracks we use are on “Empty Air” there is a synth track, we don’t play anything off Ugly Noise anymore and that was click track oriented. We don’t do any backing vocals to a click track, we don’t do any guitars either- every instrument is on stage. Bands that rely on it- different story. One of my favorite rock bands is Shinedown- I love everything they do, so catchy and hook oriented. They rely heavily on backing tracks- vocals because they are so big and you know they aren’t doing that live, more guitars because there is only one guitar player on stage, it sounds way too thick. Lenny Kravitz, same thing with huge vocals. Does Rob Zombie do it? Slipknot? Marilyn Manson? Those are bands where you want it to be as real as possible and not fall into that. Hire two more musicians and pull things off live. Pros and cons- they are rich guys so what do I know? I’m just an HVAC technician, so.