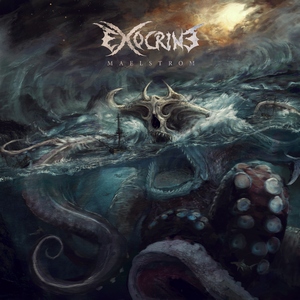 Exocrine is back once more, with another beastly cover that feels like a fitting description of their music. What made their third album, Molten Giant, stand out to these ears was their ability to capture the essence of the tech-death movement but also keep the brutality at the forefront. With many acts going for more of a sterile, cold approach to death metal, Exocrine keep all of the tasty, bludgeoning meat on the bone. The same can be said for Maelstrom, even as some components have bulked up and expanded upon.

Despite all of the technical bits that you can hear in the opening title track, what comes off as more initially impressive is how ferocious the material is. There some playful noodling and intricate melodies that stay just on the right side of tech-death wackiness, as well as some more melodic, progressive injections (the clean-ish vocals fit well too) and all of those elements are nicely bolstered by some vicious speed runs as well as some well-timed chugs as the band veers between tempos on the drop of a dime. They waste no time with “The Kraken” either, with some electronics quickly shifting into a spiraling riff that’s sure to delight tech-enthusiasts. “Wail of Water” slows the pacing a bit, offering a more cinematic vibe with synths while punishing mid-tempo riffs contrast with spirited guitar melodies before closing the song with a sledgehammering riff, followed by a trumpet solo? While it may sound strange on paper, it works. More jazzy flavors (and trumpet) pop up on “The Wreck,” but they are blended in well with some deathcore/slam elements and the momentum continues. To round things out, “The Chosen Gods” also tosses in a rather melodic break (complete with ocean-y vibes) in the song’s second half before diving into a melodic solo, and “Galactic Gods” gives a nice summary of all that has come before it, from atmosphere-building synths to frenetic speed to jazz breaks and slamming riffs.

On paper, the formula isn’t anything new here, but Exocrine’s ability to include dizzying tech fireworks and melodies as well as emphasize dishing out some blood-boiling aggression gives them a decided edge. They haven’t seemed to have gotten the hype of the elite of the genre (Obscura, Beyond Creation), but Maelstrom makes the case that they certainly have a stake in the running for the tech-death crown. 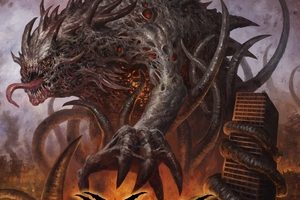