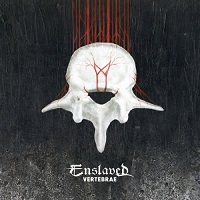 The great thing about Enslaved Mach II is that they’re toying with us and laughing all the way to the golden halls of Valhalla. Actually no, they abandoned that Viking nonsense for something more intellectual, so let’s retract that statement. Enslaved is laughing at our expense

; the expense of those who jumped on the Viking/Pagan metal bandwagon well after the band was through playing around with swords and actually being serious about that shit. And yes, Vertebrae is the defining moment of their second era.

Coming in as a bit more reigned-in, and more on the melodic side (a major plus),Vertebrae finds Enslaved reveling in the relative simplistic nature of theirnew songs

. You’re not going to get any more simplistic than the main riff on “Reflections,” but it might be guitarist/main songwriter Ivar Bjornson’s most devastating stroke to date. Even “Ground,” which utilizes chords and harmonies never heard before in the Enslaved pantheon is beyond mighty. It’s mammoth.

Clean vocals abound from keyboardist Herbrand Larsen, who smoothly fits in his ample mid-range on opener “Clouds” and the aforementioned “Ground.” Larsen’s keys are used heavily throughout the album, adding some extra width to both the title track and “New Dawn,” while lead guitarist Ice Dale busts out the solo of the year on “Reflections” at the 3:23 mark that again, is so simple, so easy, that it’s sublime. Better yet, check out Dale’s work on “Ground,” a true homage to Gilmour if there ever was one.

Don’t get the impression that Vertebrae is devoid of any harshness, ‘cause it’s still there on “Center” and scattered about most of the album, but they’ve woven in the spacey prog bits so well into their sound that the notion of listening to an extreme metal album is almost an afterthought. This should continue to open the doors for new listeners of the band as their sound continues to balloon.

Enslaved is going to make you work and put the time in necessary to graspVertebrae. As accessible as their music has become, there’s still this giant wall of illusion surrounding the band. You’ll never get too close to Enslaved, but the too-elusive and esoteric nature of their Viking era is gone, as is their short-lived stoner/doom period during their early part of this decade. Left is a core of albums starting with 2003’s Below the Lights that captures a band doing something rarely seen in metal these days: developing.