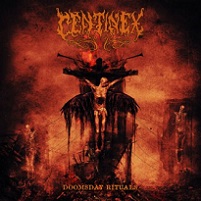 The ultra-simplistic, almost barbaric churn of Centinex’s new Doomsday Rituals got this scribe to thinking: What else is a respectable, but mid-tier classic Swedish death metal band to do other than get right down to their roots? It’s somewhat of a tired statement considering how many bands pledge their unwavering allegiance to the bands so responsible for getting them into music, but in the case of Centinex, their rather noticeable plunge back into the dark, dirty waters of death metal’s meat-and-potatoes past serves them exceptionally well here.

No longer interested in flirting with melody (see: 2004’s Decadence – Prophecies of Cosmic Chaos), the Swedes have effectively stripped their sound down to its core. The riffs may be a bit too simplistic at times, but they’re arranged in such a manner that the groove, momentum, and heaviness cannot be avoided. We’ll point to the molten, fist-to-the-face angle of opener “Flesh Passion,” or the head-bobbing “Dismemberment Supreme” (what a title!), or the barreling “Exist to Feed.” These cuts are taut, no-frills, operating without an over-arching angle to mangle death metal’s (already) rotten (living) corpse.

It’s refreshing to see a veteran band understand their true function at such a stage in their career. Centinex could have made a concerted effort to amplify their technical prowess, or pluck more melody out of the air, but the old-school has prevailed on Doomsday Rituals. And frankly, we didn’t envision the album being so effect and so damn gratifying in the most basic and literal sense possible. Centinex are like a bunch of old dogs re-learning old tricks.