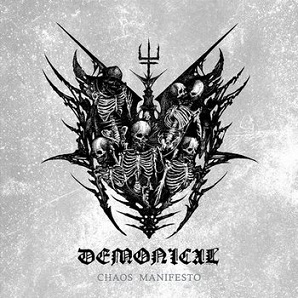 It turns out Centinex bassist Martin Schulman can have his cake and eat it, too. He formed Demonical in 2006 right after Centinex’s initial breakup a year prior. Demonical subsequently churned out a series of full-lengths and splits, only for Centinex to reform in 2014, prompting Schulman to turn his attention back to his first band. It explains why Demonical hasn’t been heard from since 2013’s Darkness Unbound and Centinex has popped out two full-lengths in the time between. Now back with Chaos Manifesto, Demonical is close to turning Boss HM-2 pedal worship into a science.

The aforementioned pedal was first employed by the likes of Nihilist, who became Entombed, as well as Dismember and Grave. It’s perhaps unnecessary to discuss how these bands came to shape Scandinavian death metal, but the HM-2 pedal was crucial in its execution. Raw, buzzing, almost like a 500-chainsaw brigade, it’s the guitar tone of choice for Swedish death metal bands. And here’s Demonical using it to the max, pushing their pounding, d-beat-inclined numbers through the bog, the pulverizing drive of “Towards Greater Gods,” “Sung to Possess” and treacherous “From Nothing” acting as mere conduits to a more formative time when Swedish death metal packed the ultimate punch.

Now joined by October Tide throat Alexander Högbom and lead guitarist Eki Kumpulainen, Schulman has assembled a veritable death metal firing squad. It has turned Chaos Manifesto into an unrelenting, unyielding opus, the throttling execution of a sound that will probably never fall by the wayside.